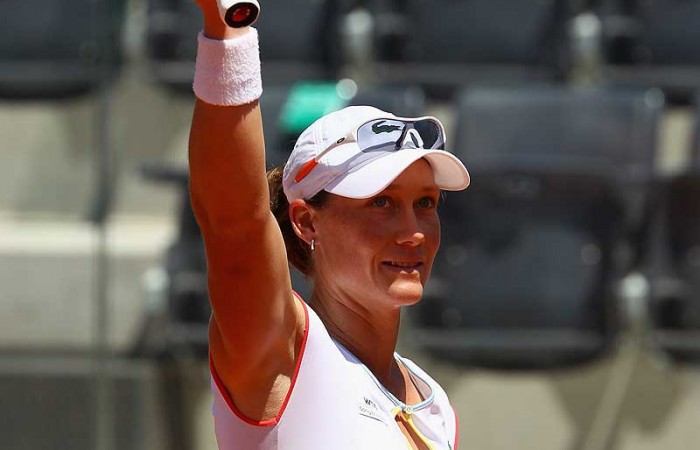 Samantha Stosur reached her first final since the 2010 French Open following a 7-6 (8-6) 6-0 victory over China’s Li Na at the WTA’s Rome International on Saturday.

It was the world No.7’s third straight-sets win and maintained her unbeaten record against Li, ranked one place above her.

She will play either world No.1 Caroline Wozniacki or former Wimbledon champion Maria Sharapova in Sunday’s final.

“I’ve had a couple of wins against Caroline but I’ve never beaten Maria.

“Regardless of who I play it will be two very different matches, but either way they’ll both be a challenge.

“I’m looking forward to that, I haven’t played a final for a year now, it will be a very exciting day.”

The sixth seed got off to a flying start and broke Li in the opening game, working the Chinese wide to her backhand and forcing a short defensive return before steaming up to the net and powering away a forehand winner.

Stosur forced a set point on the fourth seed’s serve at 5-3 but a deep first serve gave Li a short return to put away.

A series of deep crosscourt backhands setting her up for a forehand winner from close to the net saw Li fend off another set point soon after before she held serve.

That proved a vital hold as in the next game Li forced a break point and levelled up at 5-5 when Stosur went wide with a backhand.

The first mini-break in the tie-break went Li’s way when she brought Stosur up to the net with a drop shot and then rasped a backhand pass crosscourt.

But she gave it up immediately with a double fault.

Li brought up a set point with a forehand winner down line but couldn’t take it when she put the same shot into the tramlines on the next point.

Stosur was not so generous when she was presented with a set point moments later, hitting a powerful serve out wide and following it up with a forehand winner.

And the Chinese player’s game crumbled from there as Stosur cantered through the rest of the set.