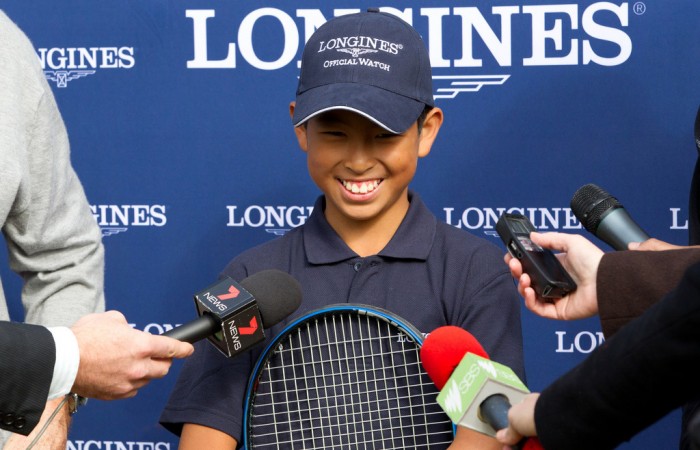 My name is Chase Ferguson, I’m 12 years old and I live in Melbourne, Victoria, Australia with my Mum, my Dad and my sister Nancy.

I started playing tennis when I was three because I watched my older sister while she was training. It looked like fun and I wanted to join in. My mum and dad even had to cut down a racquet for me because I was so small when I started to play.

I love tennis because it’s lots of fun! I find it interesting because I get to travel to tournaments all over Australia and meet and play against lots of other kids, and I’m good at it!  I like to fight to win and I never give up in matches. I train about five days a week at the National Academy in Melbourne with Wayne Arthurs, and at the moment I’m really working on improving my fitness. I hope this will make a big difference to my game.

I have recently been selected to go to Paris for the Longines Future Aces Tournament and will do my very best to make my coaches, my family and my country proud.

I can’t really believe that I have been given the opportunity to represent Australia and play against some of the best kids my age in the world.

This will be my first trip to Europe so it’s pretty awesome to think that I’ll be playing at Roland Garros, especially while the French Open is on.

I’ve been lucky to see some of my favourite players up close at the Australian Open so I hope I can see them on court again. I really like Federer because sometimes he just gets shots that no other player can, like between his legs and around the net. And Nadal is really intense. He’s so much fun to watch and he works really hard all the time, no matter who he’s playing against.

To have the chance to play at the same place at the same time as the world’s best players will be spectacular.

Clay is my favourite surface and I really enjoy sliding to get to the ball and the different movement.  I can’t wait to have the experience of playing on the French Open clay. I won the doubles at the 12/u Claycourt Nationals in Queensland in April and reached the quarters in singles.  I hope I can do even better in the Longines Future Aces tournament.

I’d like to thank Longines and Tennis Australia for the opportunity to be part of the tournament at Roland Garros. I can’t wait to get there and play as well as I possibly can.