Novak closing in on No.1 ranking

Novak Djokovic has a chance to claim the No.1 ranking in men's for the first time if he wins this week's Rome Masters. 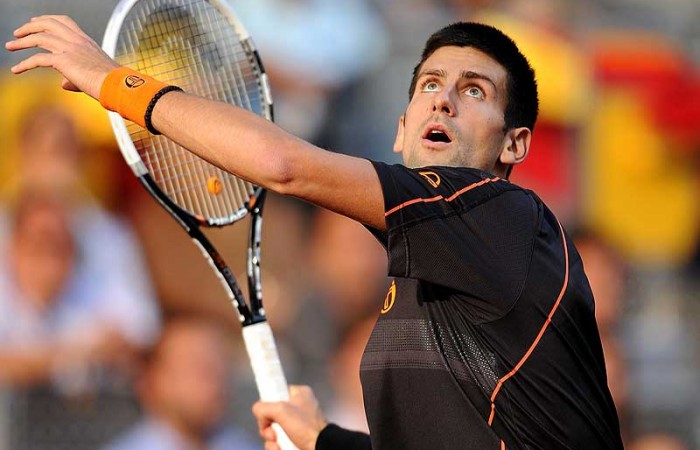 Novak Djokovic has a chance to claim the No.1 ranking in men’s for the first time if he wins this week’s Rome Masters.

The Serbian has won all 32 of his matches this year and beat top-ranked Rafael Nadal in straight sets on clay in the Madrid Masters final Sunday.

If Djokovic wins his seventh consecutive title of 2011 at the Foro Italico and Nadal fails to reach the semifinals, Djokovic will become the first player other than Nadal or Roger Federer to hold the No.1 ranking since February 2004.

Djokovic moved ahead of Federer for the No.2 spot in March.

“If I keep winning I’ll get closer but I’m trying not to think about that,” Djokovic said on Sunday. “It was a perfect start with the two tournaments that I won and I need to stay dedicated and focused on the upcoming events.”

Djokovic began the month by winning in Belgrade and his unbeaten run to begin the year now trails only John McEnroe’s 42-0 start in 1984.

“It’s unbelievable what he’s been able to accomplish so far this year,” said Andy Roddick, the American who held the top spot briefly in 2003 and 2004.

“You can insert any number of positive adjectives and superlatives and they’ll probably all be true at this point. He’s playing very, very confident tennis and in his head he’s in a perfect place right now, so it’s going to be interesting to see how the rest of the year plays out.”

If Nadal holds on this week, Djokovic could still take the top ranking at the French Open, which starts in less than two weeks. Nadal is the defending champion at Roland Garros, while Djokovic has only to defend a quarterfinal result.

“If I want to reach No.1, I will have to play consistently well because that’s what Rafa and the other players will do,” Djokovic said.

“Probably because of my winning streak and being in the shape of a lifetime – I’m playing the best tennis of my career – I’m probably one of the favourites (at Roland Garros).”

Djokovic also beat Nadal in the final in Key Biscayne and Indian Wells this year, but Sunday’s victory was his first in 10 attempts over the Spaniard on clay.

“The No.1 ranking is not in danger – it’s finished. Let’s not lie to ourselves, that’s the reality,” Nadal said.

“Nobody likes to lose. I have to see what’s missing and working with a cool, open mind to decipher things and find the solutions. To try to do a little better next time.”

Nadal has won the Italian event five of the past six years, while Djokovic took the title in 2008.

Djokovic will open against Polish qualifier Lukasz Kubot, while Nadal could face Madrid semifinalist Thomaz Bellucci in his first match.

Also Monday, no American man or woman was in the top 10 for the first time in the 38-year history of the rankings.

Mardy Fish and Andy Roddick are Nos.11 and 12, while Serena and Venus Williams are Nos.17 and 19, respectively.

Serena Williams has not played since winning Wimbledon last year following two foot operations and treatment for a blood clot in her lung, while Venus Williams has been sidelined since the Australian Open with a hip injury.

Petra Kvitova of the Czech Republic entered the top 10 for the first time at No.10 following her victory over Victoria Azarenka in the Madrid women’s final Sunday.