Australian Sam Stosur was upset in the third round of the WTA-ATP Madrid Masters on Thursday as German Julia Goerges defeated world No.1 Caroline Wozniacki for the second time in little more than a week. 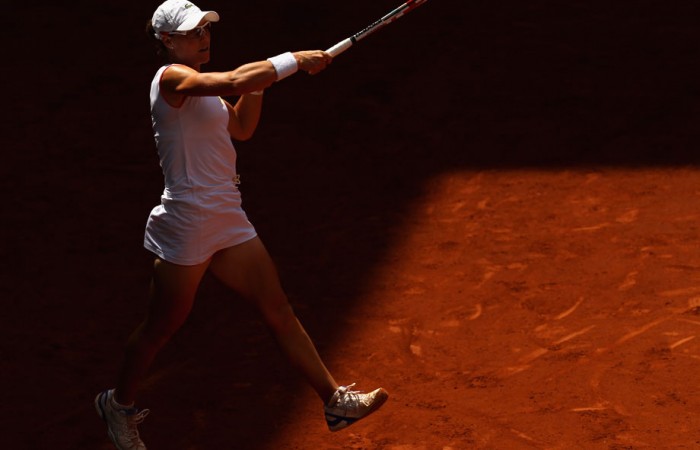 Australian Sam Stosur was upset in the third round of the WTA-ATP Madrid Masters on Thursday as German Julia Goerges defeated world No.1 Caroline Wozniacki for the second time in little more than a week.

Russia’s Anastasia Pavlyuchenkova beat fifth-seeded Stosur 7-6(4) 6-3 and Goerges beat the top seed 6-4 1-6 6-3. The news wasn’t so good for Australia’s Jarmila Gajdosova either, who fell in straight sets to Lucie Safarova, 6-3 6-3.

Goerges, only the second German to win the Stuttgart WTA tournament, is making a solid Madrid debut and next plays Pavlyuchenkova.

Fourth seed Victoria Azarenka overcame Spain’s Arantxa Parra Santonja 6-0 6-3 with the eventual winner from Belarus broken as she served for victory but breaking straight back to seal the win in 62 minutes.

Azarenka has played near flawless tennis, losing just five games this week and playing for barely more than a total of two and a half hours.

She has chances to rise to fourth in the world by reaching the final and depending on the results of French Open champion Francesca Schiavone.

Sixth seed Li Na of China, the Australian Open finalist, continued her progress, moving into the last eight thanks to a 2-6 6-2 6-1 win over Italian Roberta Vinci, who won in Barcelona last weekend.

Novak Djokovic equalled Ivan Lendl’s 1986 record of a 29-0 winning start to a season on Thursday when he reached the men’s quarterfinals.

The Serb second seed cruised to a 6-1 6-2 thrashing of Spaniard Guillermo Garcia-Lopez, which took less than an hour to extend his overall streak to 31, stretching back to the two Davis Cup final singles he won in December.

The record for a winning start to a season remains 42 matches, set by John McEnroe in 1984, with Bjorn Borg, who had 33 straight wins in 1980, in second spot.

Top-seeded holder Rafael Nadal went through to the last eight without lifting a racquet as opponent Juan Martin Del Potro retired before their third-round match with hip pain.

Unseeded Del Potro, the 2009 US Open champion, who is making a recovery this season after missing more than eight months of play in 2010 after wrist surgery, had been bothered by the problem since reaching the Estoril semifinals at the weekend.

“I have experience with injuries, and I decided not to play,” Del Potro said as he prepared to fly home to Buenos Aires for medical checks.

The Argentine will not play the Rome Masters starting on Sunday and could well be in doubt with the French Open starting on May 22.

“The pain was very strong,” said the Argentine.

Third seed Roger Federer got past Belgian Xavier Malisse 6-4 6-3 after a late-night struggle on Wednesday against Feliciano Lopez that lasted three hours.

“It was a quick turnaround,” said the two-time champion. “Mentally it was tough, I had to be ready to play a different kind of match [from the night before].

“I didn’t have high expectations, I just wanted to play a good match. I was able to do that.”