Australian Samantha Stosur moved into the third round of the ATP-WTA Madrid Masters on Tuesday, defeating Daniela Hantuchova for the second time in a fortnight on red clay. 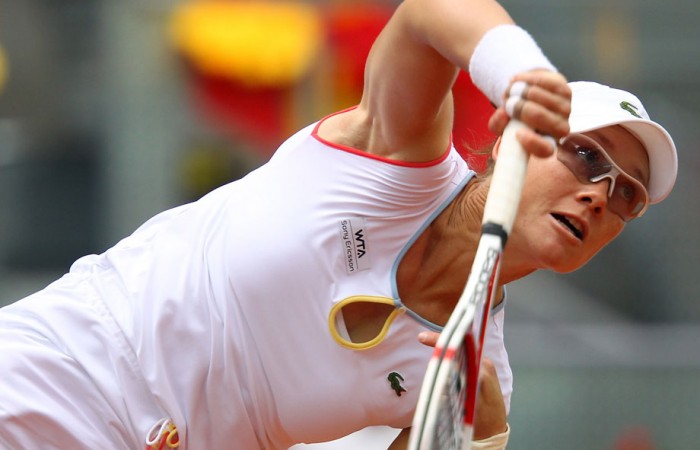 Australian Samantha Stosur moved into the third round of the ATP-WTA Madrid Masters on Tuesday, defeating Daniela Hantuchova for the second time in a fortnight on red clay.

The fifth seed came through 7-6(1) 7-5 in a second-round match that was almost interrupted by a huge thunderclap in the skies over the Caja Magica.

The noise caught Hantuchova off-guard, with the flinching Slovak asking to stop play.

But with Stosur closing in on victory, the match went ahead, with the 27 year old advancing on her second match point in just under two hours of play moments later.

Stosur lifted her clay record in 2011 to 6-2 as she works toward her career-best in Madrid, a quarterfinal last year.

Australia’s 2010 French Open runner-up dropped two places to No.8 in the world this week and, having made the quarterfinals last year in Madrid, is under pressure to repeat her last-eight effort to avoid slipping further in the rankings.

“We always have tough matches,” Stosur said after claiming victory with 24 winners and 28 unforced errors. “We know each other’s game very well.

“It was a tough match and I’m glad to get through. I was ready to play a third set if it had gone to that. I just tried to stay in the moment and play each point as it came.

“My game is feeling good on clay, in fact I’ve had some of my best matches this season on the red clay. I’m feeling very good and hope to keep going like this.”