Seventeen-year-old James Frawley won his first Junior ITF title when he came from a set down to defeat top seed, Jordan Thompson in the final of the Queensland Junior Claycourt International. 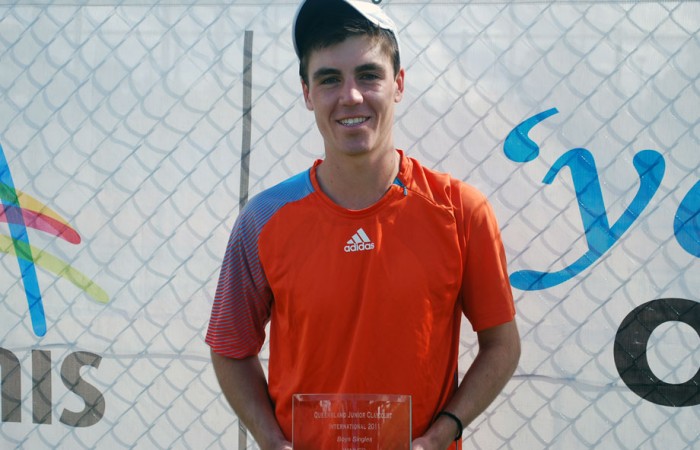 Seventeen-year-old James Frawley (O’Connor, ACT) won his first Junior ITF title when he came from a set down to defeat top seed, Jordan Thompson (Cherrybrook, NSW) in the final of the Queensland Junior Claycourt International at the George Alder Tennis Centre in Ipswich on Saturday.

“I had to play more aggressive (in the second and third sets) because Jordan just makes you play all day, so I just stepped up and that’s how I won the third,” said Frawley.

Frawley was certainly the dominant player throughout the match, breaking serve early in the match to lead 3-1.  However, Thompson, who was a member of the Junior Davis Cup team last year bounced back quickly and broke serve twice at the end of the set to take a one-set lead.

It appeared the momentum was with Thompson, but after leading 2-1 in the second, Frawley reeled off 11 out of the next 12 games in a very sudden and quick turnaround.

“I’m playing the tournament next week and hopefully I can do well there and that can set me up for later in the year, maybe Europe.”

Hibino, who is currently ranked 76 on the ITF Junior World rankings took control of the match from the beginning, breaking Panoho’s serve in the third game, which started a string of eight-straight games for the Japanese player and from there, she never let her opponent back in the match.

In the girls’ doubles final, Hibino and Panoho teamed up to end the impressive run of unseeded pair Jaimee Gilbertson (Doonan, Qld) and Andrea Dikosavljevic (Sippy Downs, Qld).  The top seeds overcame a lapse of concentration in the second set to win 6-0 0-6 [10-5].

In the boys’ doubles final, top seeds, Jack Schipanski (Glengowrie, SA) and Jordan Thompson ended the fairytale run of unseeded team, Dylan Long (Rockhampton, Qld) and Vuk Velickovic (Perth, WA) in a closely contested match 7-5 6-4 in 85 minutes.  On the way to the final, Long and Velickovic defeated the second, fifth and fourth seeds.

The final event of the Ipswich claycourt circuit begins on Tuesday, with the second of the Junior ITF Grade 4 events, the Gallipoli Youth Cup (May 3-8).

The final results are listed below, with full draws available via http://tournaments.tennis.com.au