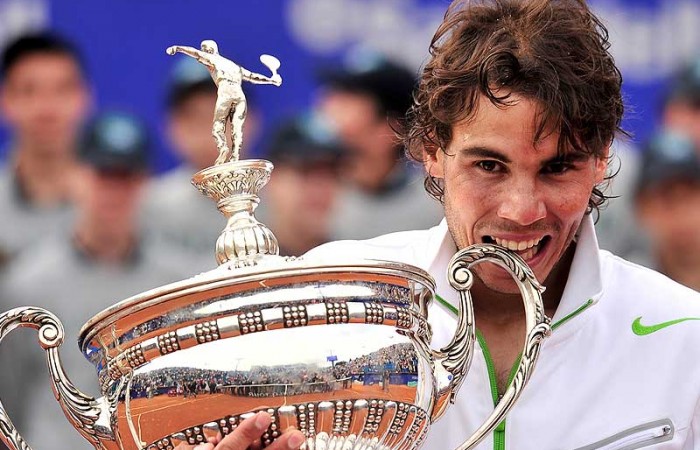 The top-ranked Spaniard chalked up his 29th straight match at the clay court event when the fourth-seeded Ferrer hit his backhand wide. Nadal’s sole loss at Barcelona came at the hands of countryman Alex Corretja in 2003.

It was Nadal’s 45th career ATP title and his second consecutive trophy after beating Ferrer at Monte Carlo in straight sets on April 17.

“I am very happy for the victory. It is incredible to come back and win here after the difficult decision to not play last year,” Nadal told Spanish national television.

Nadal triumphed at Barcelona from 2005-2009, including finals victories over Ferrer in the 2008 and 2009, before sitting out the last year’s edition to rest.

He improved his career record against Ferrer to 13-5, including a 5-0 record in finals. He has beaten Ferrer 10 straight times on clay since losing to him in 2004.

Ferrer has played in four finals this year, winning two and being a runner-up to Nadal twice.

“I am sorry for David. He is having a great season and he deserves a victory. He has had bad luck losing all three finals here to me,” Nadal said.

His 31st clay court title also moved him into third place all time ahead of Bjorn Borg and Manuel Orantes. The last time he lost on his preferred surface was to Robin Soderling at the 2009 French Open.

Both players struggled to hold their serve in a match that saw six breaks for Nadal and three for Ferrer.

Ferrer held his first service game with an excellent drop shot and had a break point in the second, but Nadal rallied to save.

Ferrer then began to lose the precision that had led him to wins over the seeded Jurgen Melzer and Nicolas Almagro in the early rounds.

The top-seeded Nadal broke Ferrer’s serve in the third with a forehand drive down the line, and didn’t drop a point in Ferrer’s next service game for his second break to go up 4-1.

Ferrer broke back when Nadal erred on his backhand slice in the sixth game, but Ferrer netted an approach shot to surrender the advantage for Nadal to comfortably take the first set.

Nadal hit another of his patented left-hand drives into the corner to break Ferrer in the first game of the second set, but Ferrer began to show some of the fight from Monte Carlo when he tested Nadal before falling 6-4, 7-5.

The second highest ranked Spanish player saved a break point to hold in the third game, and took Nadal’s serve when he forced Nadal to return long in the fourth, pulling even 2-2.

As Ferrer reduced his errors, Nadal’s volleys started to drift wide and he was broken for a second straight game when Ferrer’s forehand winner gave him a 4-2 lead.

But Nadal responded, swatting Ferrer’s drop shot to break him in the seventh game, and he broke his opponent again in his next service game when Ferrer’s cross shot landed wide to regain the lead for good.