Australia's Samantha Stosur said she has taken plenty of positives from her performances in Stuttgart, despite losing Saturday's semi-final. 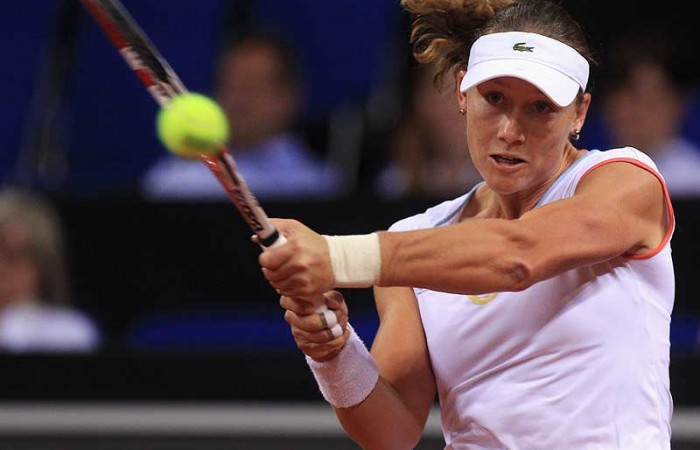 Australia’s Samantha Stosur said she has taken plenty of positives from her performances in Stuttgart, despite losing Saturday’s semi-final to Germany’s Julia Goerges.

Goerges became the first German for 15 years to reach the final of Stuttgart’s WTA tournament when she inflicted a 6-4 3-6 7-5 win over fifth-seed Stosur.

Stosur, who went onto reach the French Open final last year after losing to Justine Henin in the 2010 Stuttgart final, said she was disappointed, but also happy to have again reached the last four this year.

“I am obviously disappointed to have lost the match, but it is encouraging to have come here and played well,” said the 27-year-old.

“I probably haven’t played with this much confidence all year, I have come through and played four good matches.

“It is disappointing to lose, but it is definitely something I can build on.”

Wins here over Spain’s Maria Jose Martinez Sanchez and Daniela Hantuchova on clay put Stosur into the last eight before she picked up a valuable win over second seed and world number three Vera Zvonareva in the quarter-finals.

“It’s an important time of year coming up for me now,” said Stosur.

“I think I have taken a step in the right direction towards playing where I was going into the French Open last year.”

With top stars Serena Williams and Kim Clijsters both struggling with injuries, Stosur is amongst the favourites at Roland Garros this year, but the Australian played down her tag.

“It’s nice that people have confidence in me, but the French is nearly a month away and there are still things I need to improve before then,” she said.

“Even with Kim and Serena two out of the draw, you still have the number one and three players in the world, plus everyone else going into the rest of the draw.

“I have had good results there last year, but you have to start from scratch again.

“Winning your first round match is the most important thing and I hope I can do so well there again.”