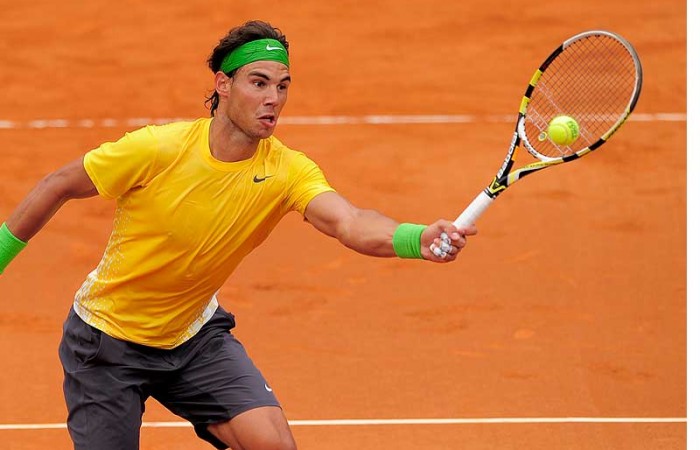 Rafael Nadal brushed aside French seventh seed Gael Monfils in a quickfire 6-2 6-2 quarter-final victory on Friday which put the five-time champion into his accustomed weekend place at the Barcelona Open.

Nadal took just 75 minutes to post his 32nd consecutive victory on clay; he last lost on the surface against Robin Soderling in the 2009 French Open fourth round.

“To win Monte Carlo last week and now to be in the Barcelona semi-finals, it’s really positive. I couldn’t have started the clay season any better, but I have to keep on working.”

Nadal has stormed through the field so far this year, losing just 10 games in three matches.

He owns eight wins from nine meetings with Monfils, the seventh seed who was playing in only his second event since a wrist injury forced him out in February.

Nadal improved to 28-1 in Barcelona as he was untroubled by Monfils on a grey cloudy day after morning rain which produced the heavy clay conditions so favoured by Nadal.

The Spaniard never faced a break point in the one-way contest while breaking Monfils four times.

Nadal will next play Croatian spoiler Ivan Dodig who prevented a dream Spanish sweep into the semi-finals as he held off Feliciano Lopez 6-4 2-6 6-4.

Dodig, ranked 56th, with a career-first title earned at home in Zagreb two months ago, saw off his Iberian challenger in drizzly, chilly Good Friday conditions.

The 26-year-old Dodig has knocked out two seeds on his way to the last eight, defeating number three Soderling and number 15 Milos Raonic.

Lopez was playing his first Barcelona quarter-final in a dozen appearances on the home clay. Before this week, Dodig had just one clay win on the ATP from four played.

Spanish players have dominated the tournament at the Real Club de Tenis over the last decade with only a 2002 title from Argentine Gaston Gaudio interrupting a home streak dating to Juan Carlos Ferrero in 2001.

Ferrer beat 2010 Roland Garros semi-finalist Melzer for the second time in as many weeks after a similar result in Monte Carlo on his way to the final.