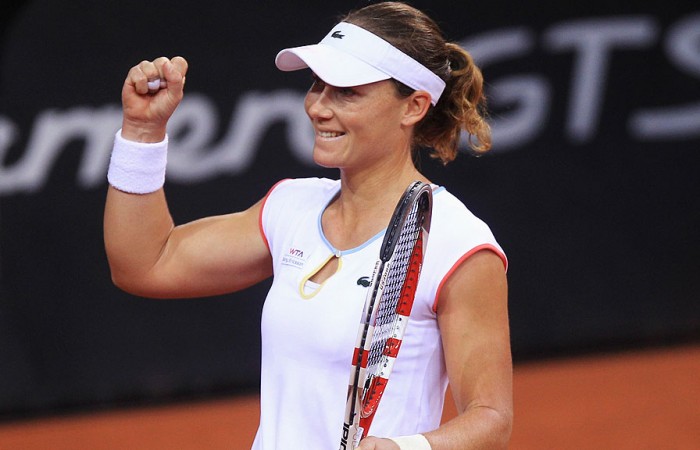 The 27-year-old Australian fifth-seed battled back from losing the first set for a 2-6 6-3 7-6(3) victory over the Russian, who is ranked third in the world, in just over two-and-a-half hours.

Having made an early exit from January’s Australian Open, Stosur is hoping to use Stuttgart to recapture the form which helped her reach the French Open final at Roland Garros last year.

“That’s probably the best match I have played all year,” beamed Stosur after reaching the last four of a tournament for the first time in 2011.

“It is very encouraging to beat a player as good as her in a tough, tight match.”

Zvonareva repeatedly broke her racquet strings and even played parts of the match with her coach’s racquet.

After the Russian had dominated the first set, the match turned in the second when the 26-year-old needed lengthy treatment for a problem with her right shoulder with the score at 2-1 to the Russian.

Stosur capitalised with a series of strong serves to take a 5-3 lead when she then broke the Russian to take the third set.

There was drama in the third with the scores locked at 5-5 as both players broke the other to set up the tie-break.

Stosur raced into a 5-0 lead before Zvonareva rallied briefly, but the Australian hung on to go into a semifinal against Germany’s Julia Goerges,
ranked 32nd in the world, who beat the Australian’s doubles partner Sabine Lisicki 6-4 6-4.

World No.1 Caroline Wozniacki avenged her shock Miami defeat to Andrea Petkovic by battling back to beat the German crowd favourite 6-4 6-1 in the night session.

Despite finding herself 4-1 down after just 21 minutes of the first set, the 20-year-old Danish top seed roared back to break Petkovic, ranked 19th in the world, three times to take the opener.

Petkovic then ran out of steam and the 23-year-old had few answers as Wozniacki blazed into a 5-0 lead in the second set.

“It was tough for me to come back in the first set,” admitted Wozniacki, who has won her last seven matches after also winning the Charleston tournament.

“I am sorry I beat the home favourite, but I hope the crowd will support me now.

“I feel very good at the moment, my volleys were working really well, which they haven’t always done, and I played some good shots.”