Stosur back in the driving seat

Forget the Porsche she's playing for, Samantha Stosur is flying again after posting her most significant win of the year. 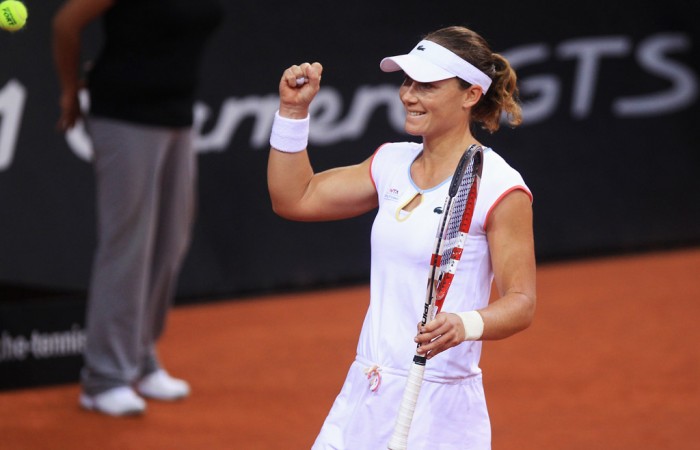 Forget the Porsche she’s playing for, Samantha Stosur is flying again after posting her most significant win of the year.

Stosur is hoping her long overdue comeback win over world No.3 Vera Zvonareva at the Porsche Grand Prix in Stuttgart is the breakthrough that triggers another hot run that carries her all the way to back-to-back French Open finals.

Stosur’s 2-6 6-3 7-6 (7-3) victory was her first third-set tiebreak triumph since the US Open last September and first success over a top-10 rival since conquering world No.1 Caroline Wozniacki at the 2010 season-ending championships.

Having lost her previous four matches that went the full distance, and eight straight three-setters over the past seven months before returning to her favoured red clay surface this week, Stosur again looked up against it after losing the first set.

But Stosur lifted after her 26-year-old opponent had received lengthy treatment for a problem with her right shoulder in the second set.

The Gold Coaster took full advantage, levelling the match and keeping her head when the decider went to a tie-break, racing to a 5-0 lead before eventually taking it 7-3.

“This is a big reward for me,” Stosur told AAP from Stuttgart.

“Any time you win these type of tight matches is satisfying, especially when you’re playing the No.3 in the world and especially because I haven’t had the best start to the year.

“These three-set matches were what I had been struggling with, so to win two back-to-back now and after being a set down today, it is very encouraging.

“It’s probably the best match I have played all year. It’s a big confidence booster. It’s all coming together.

“Hopefully it’s the start of a good couple of months for me.”

Stosur will face unseeded German Julia Georges in her first semi-final of the year, but coach David Taylor said win or lose it had already been a hugely successful tournament for his charge.

“We’d had some pretty big talks lately and to be able to discuss her shortcomings and see her respond is really satisfying.

“When you’re a top player, people are going to be aggressive against you and she wasn’t handling that well.

“Vera played a really high-quality match, didn’t give Sam hardly any cheap points and so it was good to see Sam so composed in the mind.”

Victory over Georges and then either Wozniacki who downed home favourite Andrea Petkovic 6-4 6-1 in her quarter-final or Poland’s Agnieszka Radwanska would secure Stosur a brand new Porsche 911 Carrera GTS Cabriolet valued at $A104,000.

More than enough to place Australia’s big hope in the fast lane to Paris once more.