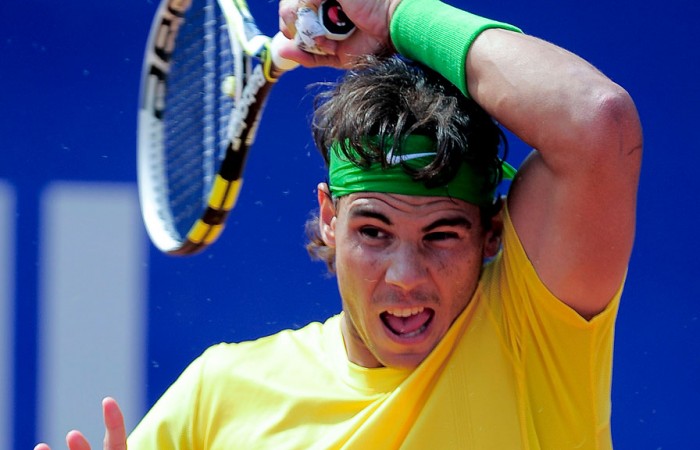 Top seed Rafael Nadal extended his current clay court win streak to 31 matches, overcoming an early run of breaks to post a 6-3 6-1 victory over Santiago Giraldo on Thursday at the ATP Barcelona Open.

Nadal is bidding for a sixth title at his “home” event in seven editions after missing 2010 due to treatment on a knee injury.

He moved into the quarterfinals in less than 90 minutes, surviving a first set with five breaks of serve against a South American opponent.

But Nadal did not hang about after securing the opening set. He took a 3-0 lead in the second and quickly closed it out. The number one was last beaten on clay at Roland Garros in 2009 by Robin Soderling in the fourth round.

Nadal now stands an ATP-leading 26 wins and four losses this season. He is 27-1 in Barcelona.

He will on Friday face Gael Monfils, who beat French compatriot Richard Gasquet 6-4 7-6(7) in their third-round encounter.

But seventh seed Monfils, a laid-back character in almost all circumstances, was deliberately refusing to consider the distinct possibility of the task ahead.

“I won’t think about the match now,” said a reluctant Monfils, playing in only his second event since a wrist injury forced him out in February. “I will prepare it just like any other match.

“Of course if it’s Nadal, the world number one, what can I say, I’ll worry about it later. It would be a tough job.”

Monfils improved to 4-3 over his friend and compatriot Gasquet, not at his best after a pair of previous matches each lasting in excess of two hours.

“I got off to the better start, Richard started slow,” said Monfils, who has played just ten matches this season. “He did not come to the court in his best form today. I played aggressive from the start, that’s what won the match for me.”

Ferrer has a strong Barcelona history, playing the semifinals or better for the past four years and losing a pair of finals to Nadal.