Sam Stosur booked her place in the quarterfinals of the Porsche Tennis Grand Prix in Stuttgart with a three-set win over Daniela Hantuchova on Thursday. 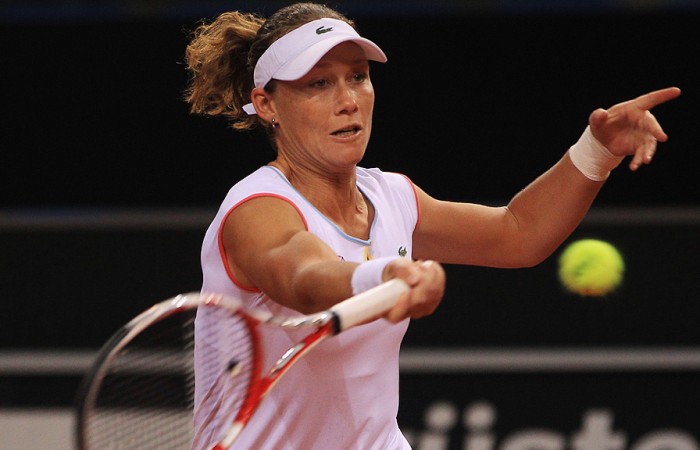 Samantha Stosur is hoping a good run at Stuttgart’s WTA tournament will give her a second successive French Open boost as she booked her place in the quarterfinals on Thursday.

The 27-year-old, ranked seventh in the world, needed just over two hours for a hard-fought 6-4 2-6 6-4 win over Slovakia’s Daniela Hantuchova, currently ranked 36 in the world.

“It was a good quality match, so I am very happy to get through that one,” Stosur said.

“It’s nice to win two games back to back, it’s a good feeling especially at this time of year.

“It’s an important time and I would like to get back the form and the kind of results I had last year.”

Having reached last year’s final here, Stosur will now face second seed and world number three Vera Zvonareva of Russia on Thursday for a place in the semifinals.

“We have played each other lots of times and we know each others’ games pretty well,” said Stosur, who has beaten the Russian five times and lost to her twice.

“I have had good success against her in the past and I need to just remember what I did and do it again.”

Having made an early exit from January’s Australian Open, Stosur is hoping to recapture the form in Stuttgart which helped her reach the French Open final at Roland Garros last year.

“It’s too early to think about Roland Garros, I am trying to take it one match at a time,” she said with the French Open set to start on May 23.

“Especially with how I have been playing recently, the main focus is just to play well and play each point.

“Getting through matches helps the confidence, I’d have taken a win in two [sets] today, if it goes to three at least I know I can tough it out.

“Physically, it’s no problem, but mentally to tough out the match after losing the second set, and not get down, was good. As soon as I got a chance, I broke back and that is really pleasing for me.”

Stosur lost last year’s final here to former world number one Justine Henin, but went on to claim revenge against the Belgian, as well as beating Serena Williams and Jelena Jankovic, on the way to the final in Paris.

“[Stuttgart] is a fantastic tournament, there is not much not to like about it,” said Stosur, who lost to Italy’s Francesca Schiavone in Paris last year.

“Any tournament where you come back after a successful run is always a good feeling.

“I think it helped [in 2010], it gave me some momentum, I wasn’t even meant to play this tournament last year, so everything seems to happen for a reason.

“I am sure that helped me going into Roland Garros to have had five good matches and to play a tight match against Henin, the first time I had played her was here.

“It helped build some momentum and the confidence for the French Open, so hopefully that will all help.”