Stosur into second round

Sam Stosur has progressed to the second round of Stuttgart's WTA tournament with a straight sets win over Spain's Maria-Jose Martinez Sanchez. 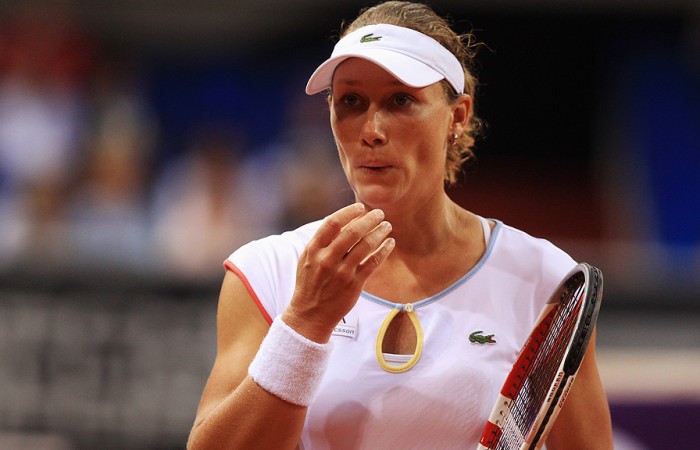 Samantha Stosur progressed to the second round of Stuttgart’s WTA tournament with a straight sets win over Spain’s Maria-Jose Martinez Sanchez on Tuesday.

The 26-year-old fifth seed, who reached last year’s Stuttgart final, needed just 80 minutes to see off the Spaniard for a 7-5 6-1 win.

Stosur looked comfortable on the clay, having enjoyed a steller season on the surface in 2010 when she lost to Justine Henin in last year’s final before going on to reach the French Open final at Roland Garros.

Brisbane-born Stosur had few problems against Martinez Sanchez, who held her own in the first set and battled back from an early break.

Stosur secured a second break in the 12th game to take the opening set, which filled her with confidence and she encountered scant resistance in the second set as Martinez Sanchez’s first serve crumbled.

Stosur cruised into a 5-0 lead in the second before Martinez Sanchez stopped the rot when serving to save the match.

She avoided the embarrassment of a whitewash, but Stosur kept her composure and served out the match.

“I am pretty pleased with that,” admitted Stosur, who suffered disappointment in January’s Australian Open when the number five seed was knocked out in the third round.

“I have been practising well on clay and it’s good to get a win.”

This is Stosur’s second clay tournament of the year, after she made the last 16 in Charleston earlier this month.

Last year, Stosur avenged her Stuttgart final defeat with victory over Henin at Roland Garros before beating top seed Serena Williams and fourth seed Jelena Jankovic on the way to the final.

She lost 6-4 7-6 (2) to Italy’s Francesca Schiavone in the final, having become the first Australian since Nicole Bradtke in 1988 to reach the semifinals of the French Open in 2009.

“It just happened over the last few years, something clicked and I got used to playing on clay,” said Stosur, who will be mindful that the French Open starts on May 22.

The Australian now faces Slovakia’s Daniela Hantuchova in the second round.

The Slovakian also had few problems at the indoor clay tournament as she enjoyed a 7-5 6-3 win over Romania’s Alexandra Dulgheru, who is above her in the world rankings.