Rafael Nadal needed to produce his best on Saturday to edge an injured Andy Murray 6-4 2-6 6-1 and book a place in the final of the Monte Carlo Masters. 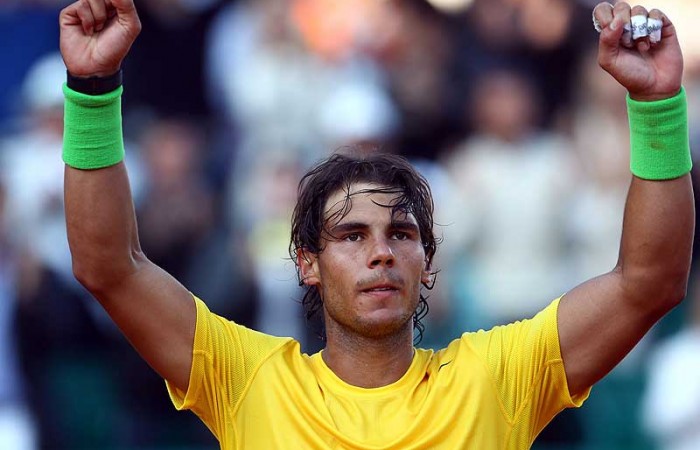 Rafael Nadal needed to produce his best on Saturday to edge an injured Andy Murray 6-4 2-6 6-1 and book a place in the final of the Monte Carlo Masters.

For the 15th time in the last two decades, a Spaniard will figure in the title match at the Country club, with six-time winner Nadal bidding for a seventh straight title here against compatriot David Ferrer.

Fourth seed Ferrer earlier ended the surprise run of Jurgen Melzer 6-3 6-2, a day after the Austrian had put out Roger Federer.

Nadal needed just shy of three hours to go past Murray, who was reportedly nursing an injured right elbow and received treatment in the third set after putting up a titanic struggle in the first two sets.

The Spanish world No.1 lost his first set in Monte Carlo since the 2009 final against Novak Djokovic as Murray turned in a fighting effort.

But Nadal has now won 36 straight matches in the principality heading into his clash with Ferrer, who he has beaten 11 times in 15 encounters.

Murray fought a 65-minute opening set, going down in the end but rallying well in the second with an attacking game that left Nadal puzzled.

Murray won a marathon 19-minute game, saving five break points for a 3-1 lead and finally levelling the match after a huge effort.

But as what was reported as a pre-match pain-killing injection began to wear off, Murray’s level dropped, with Nadal able to close out a hard-fought win with little resistance in the deciding set.

Ferrer doused cold water on Melzer’s dream run after the Austrian had stunned Federer in the quarter-finals.

“Maybe the key was in my serve,” said Ferrer.

“I played very consistent and didn’t make mistakes. I was very regular and very focused all the match.

Ferrer was playing a Monte Carlo semi-final for the second straight year.

Melzer was the first Austrian to reach the semis here since Thomas Muster won the title 15 years ago.

“I think out of the first five games, I should have won all five of them,” said Melzer.

“You could see in the beginning he didn’t feel comfortable at all.

“The longer the match went on, the more comfortable he felt and the discomfort I felt.

“If you’re in the semi-finals you want to win, no matter who you beat the day before.”