Samantha Stosur cruised into the fourth round of the Miami Masters on Saturday with a comfortable 6-0 7-6(1) win over Lucie Safarova. 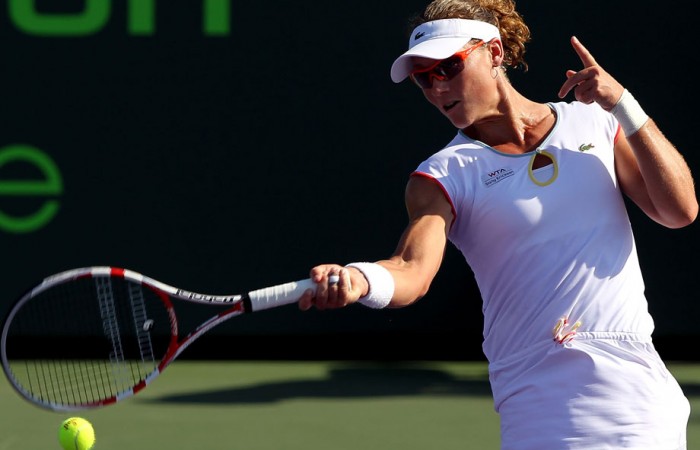 Samantha Stosur cruised into the fourth round of the Miami Masters on Saturday with a comfortable 6-0 7-6(1) win over Lucie Safarova.

World No.5 Stosur, who is seeded fourth, powered through the opening set but suffered a wobble in the second, letting slip a 5-2 advantage, before brushing aside the Czech in the tiebreak.

It was her first win over the world No.30 in five attempts and set up a clash with former world No.1 Maria Sharapova for a place in the quarterfinals.

“I have to put the previous encounters behind, take a few things that worked well for me and try to use them again, but also know that we did play a while ago,” said Sharapova when asked about her upcoming match with Stosur.

The 16th-seeded Russian beat Germany’s Sabine Lisicki 6-2 6-0, and will go into the match with Stosur in confident mood having yet to taste defeat to the Queenslander in their six previous encounters.

Roger Federer notched up another career milestone as he launched his campaign with a victory over Radek Stepanek.

The third-seeded Swiss defeated Stepanek 6-3 6-3 to reach the third round.

But there was a touch of desperation on court later as Andy Roddick became the second Miami title-holder in as many years to exit in an opening match.

The American eighth seed, who has been troubled by an illness for a month, was ambushed by Pablo Cuevas 6-4 7-6(4).

“I had a little trouble breathing out there today,” said the American, who will drop from the top 10 in the next rankings.

“I’ve had something for a little while, but I’m going to have it checked out when I get home.

“I didn’t feel good all day. I’ve had it dating back to Memphis off and on. That’s a little too long, I think.”

Cuevas, ranked 67th in the world, had never played Roddick before and made the most of his first chance.