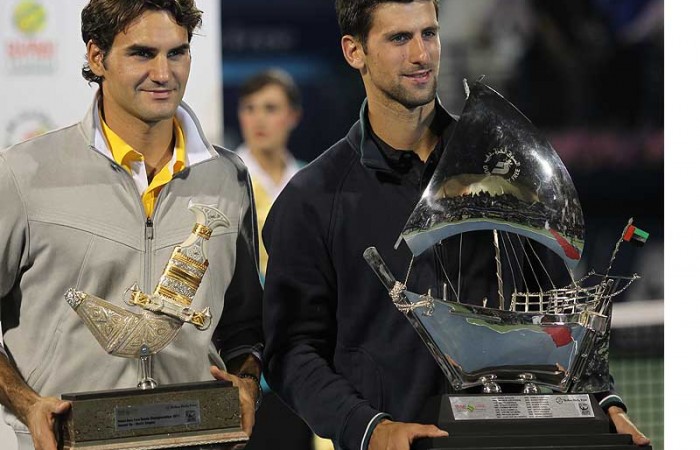 The second-seeded Serbian won with something to spare 6-3 6-3, outplaying the top-seeded Swiss maestro in the first set and recovering from 1-3 down in the second as Federer had constant problems with his timing and rhythm off the ground.

It gained Djokovic his third successive title at the $1,600,000 event, and suggested that he has every chance of leapfrogging Federer next month into the world number two ranking.

“It’s a great challenge playing Roger Federer and I had to be at the top of my game if I was going to win.”

Federer had described Djokovic as “a huge obstacle” before the final, and so it proved. Djokovic had his tactics well worked out — directing a higher proportion of his attacks to the backhand, and mixing athletic containment with fiercely angled counter-attacks which threatened to spread Federer.

It was hard to believe that Djokovic had described his performance against Tomas Berdych the previous day as a “catastrophe”.

He started with a far better rhythm, even though the conditions were very different — much cooler and slower — than during his last two matches in the afternoon sun.

Federer, by contrast, struck his first forehand into the net and it proved a signal.

He remained prone to odd mistimings under pressure and ended the match with 20 unforced errors on the forehand drive which has sometimes been described as the best shot of its kind there has been.

One of these, dumped into the net, put Federer break point down in the third game, and another error, a backhand which sent the ball in a jerky parabola over the baseline, conceded the first break of serve.

Djokovic served so well after this, directing more than 70 percent of deliveries to the Federer backhand and establishing a dominance in that area, that he comfortably consolidated his advantage three times.

He then took the first set when Federer again dropped serve, again mistiming a backhand, replaying the shot with with his hand after he had done so. The gesture indicated his concern.

But he only improved briefly. The only moments when Federer seemed likely to reward his enormous spectator support in a city which he has adopted as his training base, came early in the second set.

They happened when Djokovic had a couple of lapses with his backhand counter-hitting and Federer converted his second break point with some solid driving.

But the revival did not last long. Djokovic produced some magnificent containing to break back and Federer made four ground-stroking errors on his service game at 3-4, standing and staring in disbelief after one of them departed into the hinterland.

Djokovic closed the match out without alarms. He was, he said, especially pleased with the way he had been serving.

“I have been working really hard on this shot,” he said. “If I want to play well and have a chance to win against the best players I have to serve well. That wasn’t always the case in the past.”

It meant that Djokovic has started the season with 12 wins out of 12. Though unwilling to say so, he will be wanting to show that it means he, and not Federer, is gradually becoming Rafael Nadal’s closest rival.