Mark Philippoussis won his first title on the ATP Champions Tour after brushing aside the challenge of Aaron Krickstein 6-3 6-2 in the Delray Beach final. 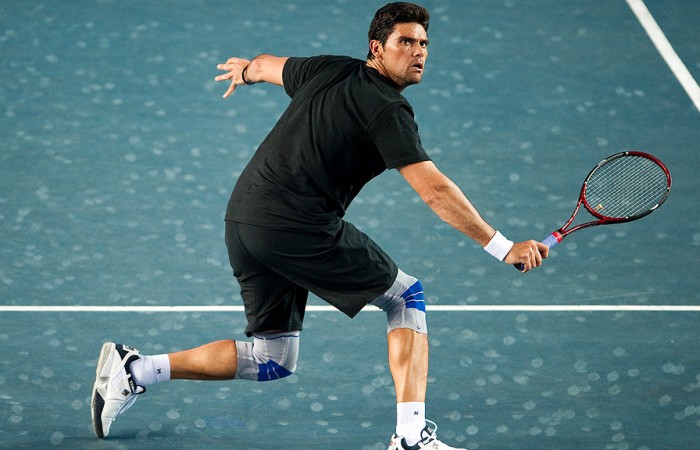 Mark Philippoussis won his first title on the ATP Champions Tour after brushing aside the challenge of Aaron Krickstein 6-3, 6-2 in the Delray Beach final.

Krickstein, who defeated John McEnroe in their last round-robin match to reach the final, had no answer to the raw power of the Australian.

Philippoussis won 21 of 23 points on his first serve to show why he earned the nickname ‘Scud’ early on in his career.

With the win, he moves to the head of the South African Airways Rankings for 2011.

“Everything came together for me tonight,” said Philippoussis. “I’m really happy to pick up my first ATP Champions Tour title. More than anything I’m happy with the way I played this week in Delray though. I played my own game, I played aggressive tennis and that’s what I wanted to do so it’s great that I’ve won this title playing that way.

“I didn’t underestimate Aaron coming in to this match,” he continued. “ I saw how well he played against McEnroe last night and I know what great shape he’s in so I knew he wouldn’t be missing much out there. I have so much respect for the guy on and off the court and I really enjoyed the match against him today.

Philippoussis also explained how important it has been for him to be able to play on the ATP Champions Tour.

“This is Tour has been so special for me because it’s restored my love for tennis,” he said. “I have been training so much the last few months and really loving the sport again. The Tour is perfect for me because it allows me to stay in shape and keep hitting the ball the way I want to hit it and also stay competitive.”

For Krickstein, it was a disappointing end to a fantastic week in which he reached his first final on the ATP Champions Tour in front of many of his friends.

“It’s not every day that you get to play an event in your backyard,” said Krickstein. “It was nice this week to be able to stay at home and play at a Champions Tour event. This is the only one in the States so for me to be able to come out, entertain and play a few matches in front of a crowd was a lot of fun.”

Philippoussis actually lost his first match of the round robin stages on Friday to fellow Aussie Pat Cash. But when Cash fell in straight sets to Mats Wilander, Philippoussis played his way into the final.