Sam Stosur has lost another tight affair, going down 6-3 5-7 7-6(4) to Jelena Jankovic in the quarterfinals of the Dubai Championships. 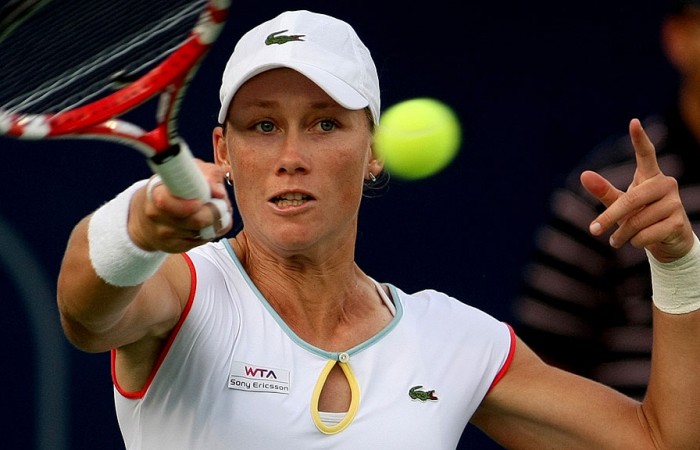 Caroline Wozniacki regained the world No.1 ranking from Kim Clijsters while Australian Sam Stosur continues to lose tight matches after the semifinalists were decided at the Dubai Open.

Wozniacki reached the last four with a 6-2 6-4 win over Shahar Peer on Friday and will play former world No.1 Jelena Jankovic from Serbia, who recovered from from 1-4 down in the final set against Stosur to win 6-3 5-7 7-6(4).

The top-seeded Dane was obliged to play on an outside court, under the giant Emirates building, next to a cosy row of trees, and with small spectator terraces containing a few hundred people.

This faraway court was the only place deemed safe for Peer, who last year became the first Israeli woman ever to compete in the UAE and who still requires constant guarding in areas separate from other players.

Now though Peer did not find her best ground stroking rhythm until she was a set and 0-4 down, and although she recovered to within a point of 5-5, Wozniacki’s tenacious rallying sealed it.

Clijsters had held the top spot for one week after winning the Australian Open last month and reaching the final of the Paris Open last week, and Wozniacki will now cling to the pinnacle at least until after the 12-day Indian Wells tournament which starts March 23.

But the rankings topper claimed she was far from overjoyed by her achievement.

“I’ve said all along I wasn’t sure about whether I could become number one this week, and that my focus really is not upon that.

“For the moment it’s more important to concentrate on what I have to do and try to win the tournament.”

Wozniacki added: “Of course it’s nice to be back at number one. I gave Kim one week, so now I will probably have it for a few more weeks now.

“I have a lot of friends here and I’ll go out to dinner with one of my best friends and her family before preparing for the match tomorrow [Saturday].”

Wozniacki began quickly, got her tactics right, made a crucial push at the end when her opponent was coming back dangerously and gained revenge for her loss to Peer here last year when she had also been the top seed.

Wozniacki’s last game recovery began at 15-40 when she found some extra pace with a backhand cross court drive, forcing Peer to overhit, struck a steadier backhand cross court which Peer returned into the net, launched a winning first serve, and wrapped it up with a good net attack.

“I finished better than I started, but I made too many mistakes,” said Peer.

Was she relieved that her security ordeal was over?

“I would prefer to be relieved in two days time,” she said tersely.

“I got wonderful treatment here. But it’s my dream to come back here and to be able to play on the centre court.”