Francesca Schiavone has given defending champions Italy a commanding 2-1 lead after delivering the knockout blow to Sam Stosur 7-6(1) 3-6 7-5 in a two hour, 44 minute struggle.<!--more--> Errors from both players punctuated the first set as the Italian and Australian shook off some early nerves. Stosur fought off two break-point opportunities in… 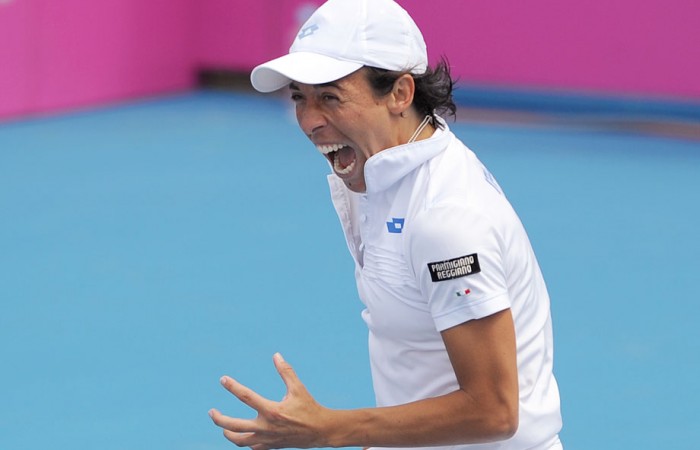 Francesca Schiavone has given defending champions Italy a commanding 2-1 lead after delivering the knockout blow to Sam Stosur 7-6(1) 3-6 7-5 in a two hour, 44 minute struggle.

Errors from both players punctuated the first set as the Italian and Australian shook off some early nerves. Stosur fought off two break-point opportunities in her first service game of the match – not the start the Queenslander was hoping for.

Schiavone seemed intent on coming to the net in the opening set, but had mixed results. It was a tactic she used successfully in her Roland Garros final victory over Stosur last year, so her line of thinking was sound.

Locked at 4-4 and some hard work from Stosur paid off with two break points on Schiavone’s serve. Despite the Italian’s excellent retrieving, Stosur’s powerful forehand was the difference. A Schiavone lob saved the first then a strong backhand volley took care of the second. A Schiavone backhand into the net gave Stosur her third opportunity, which Schiavone saved with a perfectly executed clutch ace down the T as the world No.4 went on to hold and take a 5-4 lead into the break.

Two unforced errors from Stosur handed Schiavone two set points in the next game – but she saved both, the second showing off her soft hands as she delicately dropped a forehand volley over the net and well out of the Italian’s reach. A backhand winner and good first serve later and the match was once again deadlocked at 5-5.

Fittingly, the first set ended in a tiebreaker. Schiavone raced to a 4-0 lead off the back of some Stosur unforced errors before the Queenslander got a point on the board. Schiavone served out the breaker as Stosur netted a forehand to surrender it 7-1.

A break point for Stosur slipped away as a timid prod down the line was retrieved and volleyed back by Schiavone in the second game of the second set. Two more break point chances presented themselves in the fourth game and Sam snaffled the second with a crosscourt forehand to take a 3-1 lead.

Gusting winds in the second set ripped through the Domain Tennis Centre sending a chill through the more than 2000 spectators and made conditions tough for both players.

With Stosur serving for the second set at 5-3, a brief shower forced the players off court, but not for long. The Australian put aside the memory of the two sets she failed to serve out on day one of the tie in her match with Flavia Pennetta and held to take the set 6-3 and send the rubber to a deciding third set.

Some basic errors from Schiavone gifted Stosur five break points in the third game of the final set but between Schiavone’s retrieval skills and Stosur’s errors, the Italian held what would prove to be a pivotal game.

Games stayed on serve from then on as neither player could crack the code to their opponent’s serve. Schiavone, however, came just centimetres from claiming the win in the 10th game. The Italian had three match points on the Stosur serve, but the world No.5 saved each one and held serve as the see-sawing affair continued.

Schiavone held to take a 6-5 lead before breaking Stosur in the next game to claim the third set 7-5 and give Italy the lead.

“It’s obviously very disappointing to come here and lose two matches, especially when they’re so tight like that. It’s just frustrating not being able to get over the line,” said Stosur after the match.

“You feel like you’re letting your team down if you can’t win a singles match over the weekend.”

“Sometimes you go through patches like this and, as long as you keep focusing on your game and working hard and trying to get through it, it’s going to turn around and I’ve got full belief that it can.”