Italy fights back on day one

Update 7:45 pm. Australia and two-time defending champions Italy are locked at 1-1 after a thrilling first day of their Fed Cup quarterfinal in Hobart.<!--more--> Jarmila Groth continued her dream summer to give Australia the early advantage with a spirited comeback victory over world No.4 Francesca Schiavone before Flavia Pennetta preserved her… 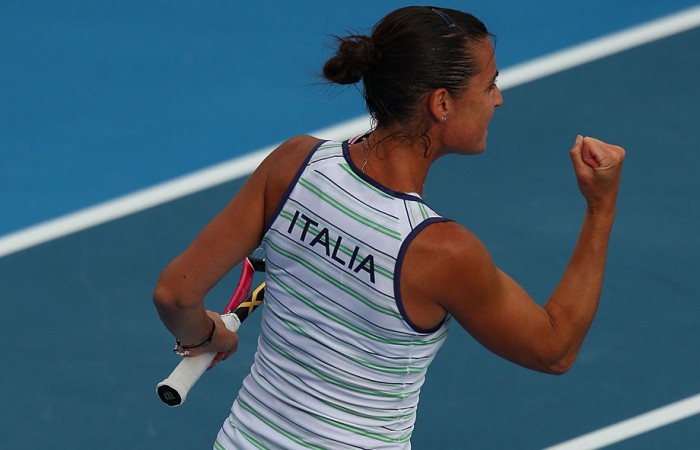 Update 7:45 pm. Australia and two-time defending champions Italy are locked at 1-1 after a thrilling first day of their Fed Cup quarterfinal in Hobart.

Jarmila Groth continued her dream summer to give Australia the early advantage with a spirited comeback victory over world No.4 Francesca Schiavone before Flavia Pennetta preserved her perfect record against world No.5 Samantha Stosur to level the best-of-five-match tie.

In an extraordinary two-and-a-half-hour encounter, Groth rallied from a set and service break down to prevail 6-7(4) 6-3 6-3 over Schiavone, the reigning French Open champion.

After clawing her way back from 0-2 and 15-40 in the second set, Groth held her nerve following a dramatic 13-minute rain delay at the most critical stage of the match to claim the biggest win of her career.

One minute, Groth had three match points with Schiavone serving at 3-5 and love-40 in the deciding set.

A minute later, Schiavone was rushing off court at game point up after an untimely sun shower hit the picturesque Domain Tennis Centre.

But, not to be denied, Groth returned to finish Schiavone off when the Italian dumped a forehand volley into the net while trying to save a fifth match point.

“It’s my first singles in Fed Cup, so it’s also very important and very exciting and I happened to beat someone who is ranked four in the world, which is amazing,” Groth said.

“It’s one of the great wins for me and I couldn’t ask for a better start.”

Groth’s watershed victory came on the very same court that the 23-year-old claimed her maiden title in Australia three weeks ago.

But Stosur’s Roland Garros final conqueror was unable to match Groth’s firepower once the Slovak-born Aussie found her range in the second and third sets.

Stosur and Pennetta entered their pivotal clash both riding long winning streaks in the competition, the Australian having won 11-straight matches over the past two years and the Italian unbeaten in her past eight encounters during the same period.

Pennetta, though, held a clear psychological edge having never dropped a set in three previous meetings with Stosur.

And the world No.16 used her mental hold to squeeze out a tense 7-6(5) 6-7(5) 6-4 success that left the tie evenly poised heading into Sunday’s reverse singles and potentially decisive doubles match.

Stosur could have won in straight sets, but was unable to serve out the first from 5-3 up nor the second from 5-4 in front.

In a rematch of their French Open decider, Stosur plays Schiavone in the opening reverse singles rubber before Groth takes on Pennetta for the first time since their only career encounter in Toronto four years ago.

But team captains have until 15 minutes after the fourth singles rubber to change their line-ups and Taylor hasn’t ruled out drafting in Stosur, a multiple grand slam doubles champion with a 6-0 win-loss record in Cup doubles matches.

Watch the Australia versus Italy Fed Cup World Group clash live on Fox Sports on 6 February or follow the live scores on tennis.com.au.