Ready for the challenge

Samantha Stosur is ready to carry a monster load if asked to play both singles and doubles in Australia's Fed Cup showdown with two-time defending champions Italy in Hobart. 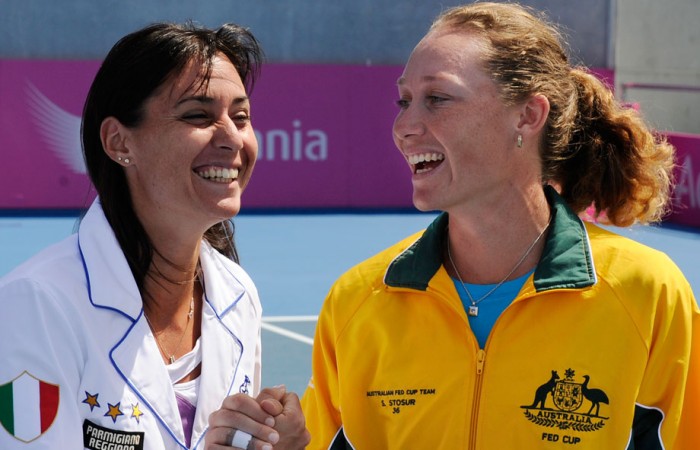 Samantha Stosur is ready to carry a monster load if asked to play both singles and doubles in Australia’s Fed Cup showdown with two-time defending champions Italy in Hobart.

For Australia’s long-awaited return to the elite eight-nation World Group for the first time since 2004 is to extend beyond this weekend, Stosur may well need to pick up all three points in the best-of-five-match tie.

That is a particularly tall order given the world No.5 faces her career nemesis Flavia Pennetta in Saturday’s second singles match before backing up against her French Open final conqueror Francesca Schiavone in Sunday’s first reverse singles rubber.

“Look, Sam’s won a couple of Grand Slams obviously in doubles and been No.1 in the world too,” Stosur told AAP.

“We’ve picked that doubles team thinking that Sam might be a bit fatigued and whatever, but it will be based on the level of Sam’s fatigue.”

Stosur hasn’t played doubles since Wimbledon last July but vowed to step up if the tie was deadlocked at 2-2 come Sunday afternoon.

“If they want me to play, then I’ll be more than happy to do that,” she said.

In the meantime, Stosur will have her hands full against Pennetta, a rival the Queenslander has yet to win a set against in three career encounters.

“I have struggled against her,” Stosur admitted.

“She can handle my pace very well. She doesn’t have a huge weapon but she does everything extremely well and she’s very consistent.

“So it’s definitely a tough match-up. But if I can play well and learn something from all those losses that I’ve had against her, hopefully I can turn it into a win.”

Groth has climbed to No.31 in the world and is quietly confident of springing an upset after winning the Hobart International at the picturesque venue only last month.

Schiavone, though, insists she too is playing the best tennis of her life after rising to world No.4 following her run to last month’s Australian Open quarterfinals in Melbourne, where the Italian veteran outlasted Svetlana Kuznetsova in the longest women’s match in Grand Slam history, a four-hour, 44-minute epic.

In a tie tipped to go down to the wire, Taylor and Schiavone both said they’d be happy with a one-all scoreline after day one.

Taylor said although Australia had been heavily dependant on Stosur in the past, he hoped the team’s vastly-improved all-round strength would secure a famous victory.

“Sam’s definitely been the stalwart of the team. I mean, she’s won her last 12 Fed Cup matches and the reason why we’re here is a big part of Sam’s success,” he said.

“But I think maybe those days where we’re relying on Sam to get two [singles] wins are closing hopefully.

“They must be. I think Jarka [Jarmila] can beat anyone and she can actually win both her rubbers here.”

Some tickets remain for this weekend’s Fed Cup World Group tie in Hobart. Tickets can be purchased from Ticketek.