The champions and the challengers have both faced the press ahead of this weekend’s first-round World Group tie in Hobart between Italy and Australia.<!--more--> The Italians are the dual defending champions and have won the women’s teams competition three times in the past five years, while the Australians have just fought their way back into… 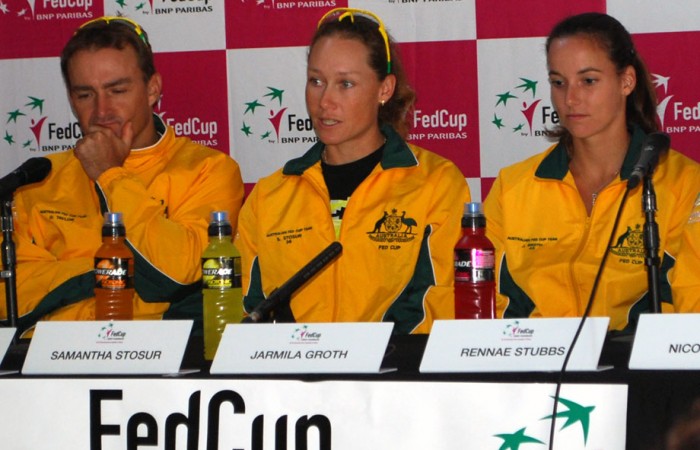 The champions and the challengers have both faced the press ahead of this weekend’s first-round World Group tie in Hobart between Italy and Australia.

The Italians are the dual defending champions and have won the women’s teams competition three times in the past five years, while the Australians have just fought their way back into the elite World Group for the first time since 2004.

Australian team captain Dave Taylor wasted no time in asserting that the locals are the underdogs heading into this tie.

“They’ve won the past two years and been the dominant Fed Cup team in the world in the last half a decade, so we really have to do some great performances to beat them,” said Taylor.

Overall these two teams have met five times in the past – Australia has won on each occasion without dropping a single rubber. History that Taylor says “has no relevance at all”.

The Italian team featuring world No.4 Francesca Schiavone, Flavia Pennetta, Sara Errani and Roberta Vinci is a strong one – all four are ranked inside the top 50. Australia, on the other hand, has three of its team members ranked inside the top 50 – world No.5 Sam Stosur, Jarmila Groth and Rennae Stubbs is in the doubles top 15, while Anastasia Rodionova isn’t far behind at No.64.

This team, Taylor says, is the strongest he’s ever fielded in his five years at the helm – evidence, he says, that Australian tennis is experiencing a resurgence in the women’s game.

“The fact that we’re in World Group I, which is the top eight teams in the world, yeah, I think that speaks for itself.

Taylor also said that his team had had a “decent summer” leading into this tie.

“I think Jarmila’s the standout winning Hobart, winning a title over the summer, and obviously won it in this stadium, so that’s a real plus.

“I think Sam played well over the summer and Anastasia had some pretty tough draws. Obviously it’s an emotional tie, Rennae’s ending her career in Fed Cup, but everything added up I think we’re in good shape.”

Stubbs has represented her country in Fed Cup competition for 16 years now – longer than any other Australian player.

“Hopefully I can be a part of the next one. I’ve told the Italians they can prolong my career by losing to us,” she joked.

While Stubbs will be the sentimental favourite when the doubles are played, most of the focus will be on Stosur and Schiavone this weekend – the 2010 French Open finalists and top five players will renew acquaintances on court this weekend. The last time they met was at the year-end championships, where Stosur got revenge of sorts against her French Open conqueror.

“Hopefully I can do it again here where it’s obviously going to count for a lot,” said Stosur.

“We always have pretty good matches so it’ll be tough but I’m looking forward to it.”

When asked if there’s added pressure on the two No.1s, Stosur was quick to assert that Fed Cup is a team event and that no team can be reliant on any one player.

“I’ll do my best [but] it doesn’t necessarily mean you’re going to win all because your No.1 player wins, it is a team effort.”

When quizzed about Stosur, Schiavone smiled before admitting that she is looking forward to facing her opposite number.

“We have good memory, I lost more times [to her] than the times that I won but it’s always interesting and good to play against a player of high level.”

The new world No.4, Schiavone at 30 years of age is ranked higher than she ever has been. And the top spot is still in her sights.

“Is a wish, of course when you work for something and you love what you do you go through everything. So, you wish and you dream and in particular you work to do it.”

But this weekend is all about the teams, not individuals and who will continue to the next round and keep their Fed Cup dream alive, something Taylor hopes his group is capable of.

There are still some tickets remaining for this weekend’s tie. Tickets can be purchased from Ticketek.