Samantha Stosur arrived in Tasmania ahead of this weekend's highly anticipated Fed Cup tie against Italy and officially opened Launceston’s new regional tennis centre as part of her role as an ambassador for Tennis Australia’s Courts and Facilities program.<!--more--> The world No.5 was joined by Tennis Tasmania’s President Peter… 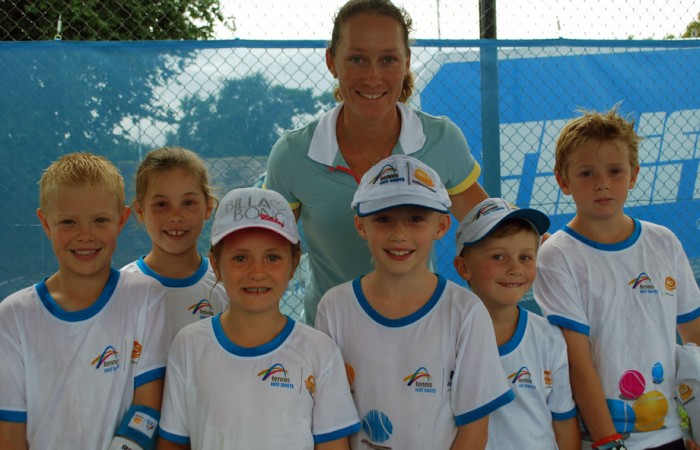 Samantha Stosur arrived in Tasmania ahead of this weekend’s highly anticipated Fed Cup tie against Italy and officially opened Launceston’s new regional tennis centre as part of her role as an ambassador for Tennis Australia’s Courts and Facilities program.

Stosur said the new centre will give more people the chance to play and enjoy tennis, a sport that has given her so much.

“If we can keep building new courts and facilities and fixing some of those that are in need of repair, it will create more and more opportunities for people to play tennis,” Stosur said.

“Tennis clubs are such an intrinsic part of towns as demonstrated here and my hope is that this development will encourage even more people to get out and enjoy the game as I have.

“I am particularly excited about this project as it is the perfect example of local, state and federal government working together, alongside tennis associations.

“From what I have seen this new regional tennis centre will be a huge asset for Launceston, Tasmania and the larger tennis community.”

Stosur is in Tasmania to prepare for this weekend’s Fed Cup by BNP Paribas World Group tie to be held in Hobart.

The 26 year old will lead the Australian team, which is completed by Jarmila Groth, Anastasia Rodionova and doubles specialist Rennae Stubbs.

They are due to take on the reigning Fed Cup champions Italy, who have named an imposing side of Francesca Schiavone, Flavia Pennetta, Sara Errani and Roberta Vinci.

Stosur is set to play Schiavone, the world No.4, in a rematch of the French Open 2010 final.

The Australian team will be hoping that the outcome is reversed this weekend, and that Hobart International 2011 winner Groth continues her winning form on Tasmanian soil.

Stosur says while Italy has won the event three times in the past six years, Australia shouldn’t be underestimated.

“They have got a fantastic team, obviously if you can win the event that many times in recent years you are doing something right and they are a very close knit team as are we,” Stosur said.

“So I think on paper they are probably the favourites but I certainly wouldn’t be surprised if we get up and win.”

The Fed Cup will be played at the Domain Tennis Centre in Hobart on Saturday 5 and Sunday 6 February.

The need for a facility of this type was identified a number of years ago and this new facility will allow tournament organisers to have a central tournament venue.