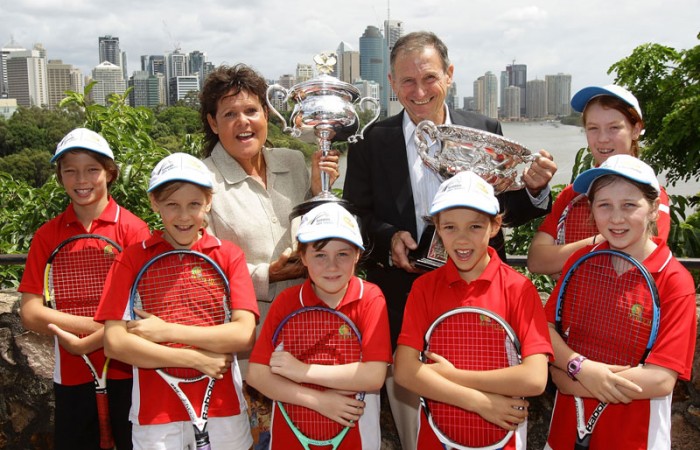 The Learn. Earn. Legend! program is about encouraging young Indigenous people to stay in school or training as part of the Government’s commitment to Closing the Gap on Indigenous Employment.

Minister Arbib today announced Evonne Goolagong-Cawley as the ambassador for the Learn. Earn.

“The Goolagong National Development Camp is one of the best sporting programs I have seen in a long time,” Minister Arbib said.

“Young indigenous children from across the country come to Melbourne as part of Evonne’s camp and at the same time as being mentored throughout the year they are encouraged to stay in school and work with their family which is exactly what Learn Earn Legend program is all about.”

“In the space of a week, through my department, the Department of Education, Employment and Workplace Relations and Tennis Australia we have come up with a wonderful initiative.”

“The Federal Government will contribute $350,000 over three years to the program, Tennis Australia will match the funding and as a result the program will be expanded to dozens more young indigenous children who will have the opportunity to come to Melbourne, to play on these courts but at the same time maintain an education, ” Arbib said.

“My first dream was to win Wimbledon and I achieved that and when I came back to Australia in 1992, what I wanted to do was try to work with as many indigenous children as possible. I wanted to get them involved and we have been working on this [the Development Camp] for fifteen years now and taken it all around Australia.

“I started out by having people help me get on my way and I wanted to do that with other indigenous people. If others didn’t give me that support in the beginning, I wouldn’t be standing here today.

“It’s people like Minister Arbib who are going to be helping so many young indigenous people out there – not just with a career in tennis, but jobs and education – which is something we have been doing for a very long time now.”

“The partnership with the Australian Government and the work that Evonne has been doing with Tennis Australia for the last fifteen years has been truly incredible.”

“Evonne has visited so many communities right across Australia – not only to play tennis but to learn and stay in school. The follow up that Evonne has had with countless families to ensure they stay focused with sport and with school, it’s a shining prospect.”

“We’re very grateful for the partnership and we look forward to seeing it realise its potential. We’re excited by the fact that we have got such strong leaders in our community and in tennis to be able to fulfil this promise.”

The Learn. Earn. Legend! funding will increase the number of Goolagong-Cawley Scholarships for students to attend schools where they can both study and play tennis.

It will also support internships and school-based traineeships for participants and more than double the number of kids who can attend the Goolagong National Development Camp.

The NRL, AFL and Cricket Australia are already participating in the Learn. Earn. Legend! Program.