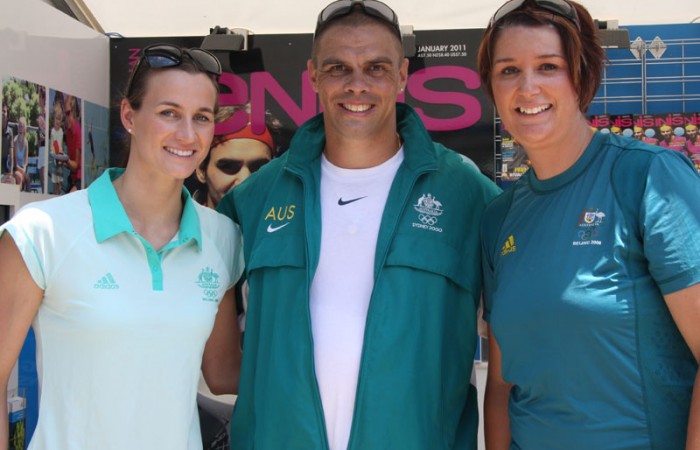 Swimmer Sophie Edington, who made her Olympic debut at the Beijing 2008 Olympic Games and the semi-finals in her pet event, the 100m backstroke, finishing 13th, enjoyed a ‘hit and giggle’ with the aspiring tennis players on the MLC Tennis Hot Shot courts.

“ It’s been nice to come and watch some tennis but it’s been a little while since I’ve hit a tennis ball – so it was really good to have a bit of fun with the kids.  There are some very talented kids out there with the tennis,” she added.

Indigenous110m hurdler Kyle Vander-Kuyp, who competed at the Atlanta 1996 and Sydney 2000 Olympic Games, had flashbacks of his childhood when he picked up a tennis racquet this morning.

“I remember my first racquet at home and it’s probably still in the garage somewhere,” Vander-Kuyp said.  “I love tennis; I remember watching Boris Becker as a kid in the 80’s, and Australian tennis legend Evonne Goolagong was one of the role models that I looked up to.”

This week Vander-Kuyp coincidently bumped into Goolagong – who won four Australian championships between 1974 and 1977 and finished her career with 13 majors.

“I have just started a job in an Indigenous mentoring program out at Monash University, and Evonne was there using Monash facilities having her annual Indigenous camp,” Vander-Kuyp revealed.  One of my cousins was coaching there too – she used to play tennis and now she’s gone on to coach,” he added.

“I met Sam Stosur at the Beijing Olympics when she was on her comeback from her illness,” Titcume said. “The Softball team was situated close to the tennis players so I think in that Olympic team atmosphere you create these friendships that you never thought where going to be possible.

“After Beijing I played softball in Tokyo for three years, and when Sam played at the Tokyo Open, I went and watched her play,” Titcume added.

“The Tokyo is obviously not as big as the Australian Open, so I went out to warm up with Sam…I realised the ferocity in which she hits the ball… the speed wasn’t a factor…it was the spin on the ball – trying to hit it back was a major issue! I hit a lot of balls into the stand, which gave the Japanese fans a lot of souvenirs,” she added.

Whilst at Fan Zone the Olympians all had a hit of MLC Tennis Hot Shots, Tennis Australia’s official kid starter program, and participated in an Autograph Island session followed by a visit to the Tennis Booth in Garden Square to meet and great their fans.