No time to dwell on opportunities lost, Samantha Stosur has shift her focus to next month's vital Fed Cup tie after having her Australian Open hopes crushed by Czech shot-maker Petra Kvitova.<!--more--> Stosur will lead Australia into battle against two-time defending champions Italy in Hobart on February 5-6. The world No.6 is intent on… 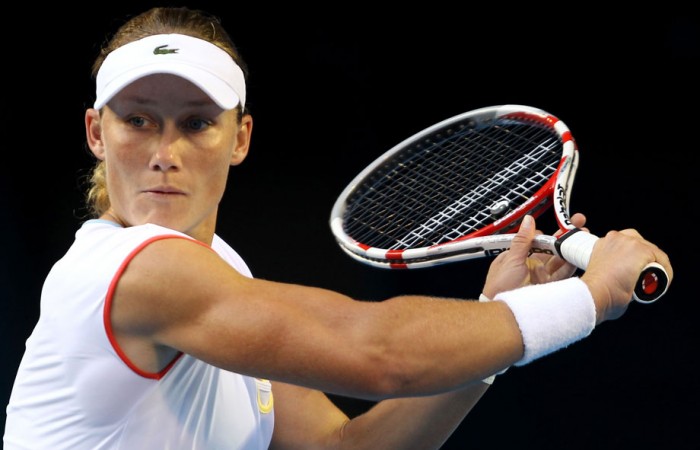 No time to dwell on opportunities lost, Samantha Stosur has shift her focus to next month’s vital Fed Cup tie after having her Australian Open hopes crushed by Czech shot-maker Petra Kvitova.

Stosur will lead Australia into battle against two-time defending champions Italy in Hobart on February 5-6.

The world No.6 is intent on extending her 12-match winning streak in the competition when Australia makes its long-awaited re-entry to the eight-nation World Group after six years toiling away in regional qualifying.

Despite her disappointing and premature exit from the Open, Stosur said there was still much to play for over the Australian summer before she heads to the US for the big hardcourt events in Indian Wells and Miami.

“It’s a pretty full-on few weeks still left to go,” Stosur said as she came to terms with her 7-6(5) 6-3 loss to the 2010 Wimbledon semifinalist on Saturday night.

“It’s a tough loss, but I think I can walk off thinking I played quite well and did everything that I could.

“I’d much rather have this scenario than have played terrible and lost it myself.”

Fourth-round showings in 2006 and 2010 remain Stosur’s best efforts at Melbourne Park, but the 26-year-old remains hopeful of one day breaking through at her home major.

The Queenslander believed she handled the pressure of carrying Australian hopes at Melbourne Park and was ready to continue shouldering the burden that comes with a 33-year local title drought.

“Over the last 12 months I’ve come to realise that it’s there a lot more,” Stosur said.

“I guess the top players, they get used to it and handle it better, get through different scenarios. That’s why they’re the best.

“So it’s all a learning curve but I think so far I’m going well. I don’t think there’s anything that I did that was a detriment to my results here. I know that I’ve definitely improved in that area.”

If not the Australian Open, Stosur hopes to win any of the other three majors to validate her lofty status in women’s tennis pecking order.

“Every grand slam is tough. I’ll take any of them,” she said.

“I’m not going to be picky or choosy. Hopefully one day it’s going to happen.”

The Italians have a powerful line-up headed by Stosur’s French Open final conqueror Francesca Schiavone and the world’s top-ranked doubles player Flavia Pennetta, who is also through to the fourth round of the Open singles.