Champions play on same side for charity

In a fortnight, they may well be facing off with a slice of tennis history on the line. 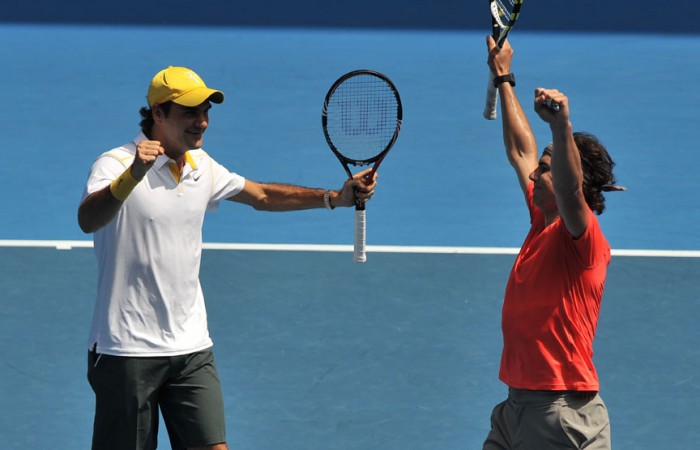 In a fortnight, they may well be facing off with a slice of tennis history on the line.

But on Sunday, the two dominant figures of men’s tennis, Rafael Nadal and Roger Federer, traded blows on Rod Laver Arena and no one cared who won.

The Australian Open, which starts at Melbourne Park on Monday, will no doubt have its usual share of tense moments and angry outbursts, jubilation and disappointment.

But, before all that, a clutch of the world’s best – and certainly best-paid – players graced the main showcase court for a lighthearted exhibition of their sport.

It raised $1.5 million to help repair some of the damage caused by Australia’s devastating floods.

“We can’t bring back the lives that have been lost, but we can take away some of the stress,” women’s singles tournament favourite Kim Clijsters said.

And as Australia’s top men’s and women’s singles hopes Lleyton Hewitt and Samantha Stosur noted, it was also a timely reminder – before they shoulder the hopes of a nation – that there are more important things in life.

“It brings home that tennis isn’t that significant when there’s a lot of lives threatened,” Hewitt said.

“We love what we do, but there’s far greater things going on in the world. So if we can all come together and support something like (relief from) these floods, I think it’s great,” Stosur said.

Amid much banter and hi-jinks, Stosur and Clijsters played a few points in earnest in what was perhaps a prelude to a potential semi-final clash.

Nadal and Federer also briefly went shot for shot, giving a taste of the most likely men’s final match-up.

Nadal is seeking to become the first man since Rod Laver in 1969 to hold all four grand slam titles simultaneously, while Federer is out to defend his 2010 victory and stretch his record collection of major trophies to 17.

Federer will begin his defence against Slovak Lukas Lacko on Rod Laver Arena on Monday.