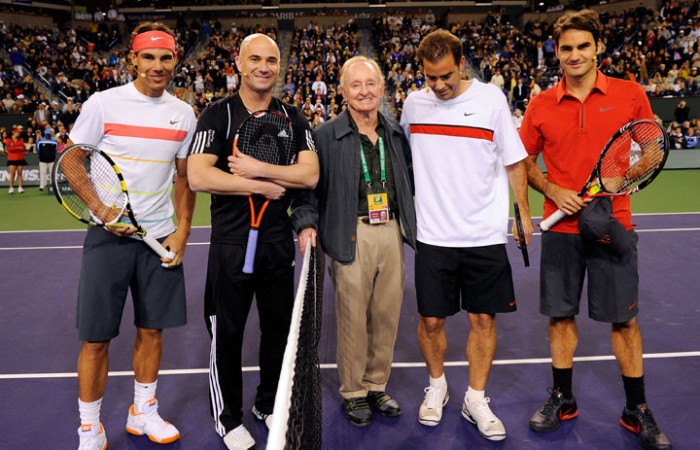 “I have been moved by what I have seen not only in my home town (Rockhampton) but across Queensland and Australia,” Laver said from his home in the United States.

“This is a tragedy of international proportions and it is devastating to see so many families who now have nowhere to go.

“I think it is great that the tennis family is coming together and raising money for the flood ravaged communities. My thoughts are with you all and it makes me proud as an Australian to see how everyone pitches in during a time of crisis like this.”

This growing list of tennis elite includes ten Grand Slam champions and 11 current or former No.1’s, with all putting aside their Australian Open preparations and joining forces to raise money for the victims of the flood disaster in Queensland and across Australia.

Rally for Relief at Rod Laver Arena sold out within a matter of hours, but fans wanting to watch the who’s who of tennis in action and help raise funds can still buy a $10 ticket to Melbourne Park’s Garden Square to watch all the action from centre court live on the big screen.

With Australian Open qualifying action taking place on the outside courts, gates to Melbourne Park will open at 9.30am. Doors to Rod Laver Arena will open at 12.30pm.

Performer Anthony Callea has also put his hand up to be part of the Rally for Relief effort and will perform live for the crowd in Garden Square from 1.00pm.

Rally for Relief is just one of the many fundraising efforts running throughout Australian Open 2011.

An ATP and WTA pledge of $10 for every ace served by players at the Brisbane International, Medibank International Sydney, Moorilla International in Hobart and the Australian Open
·         Individual player donations

All proceeds will go to flood relief across the nation.

Ground Passes to watch Rally for Relief on the big screen in Garden Square are $10 each and are available through Ticketek.