Stosur not looking ahead

Steely-eyed Samantha Stosur is focusing strictly on her little-known first-round opponent after being dealt a relatively comfortable draw for the Australian Open starting on Monday. 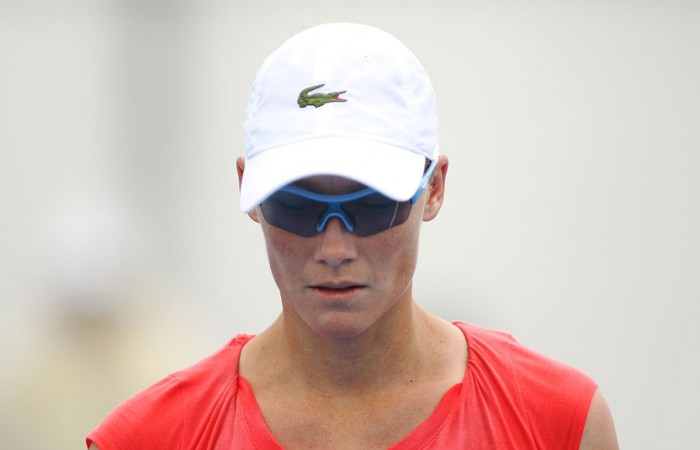 Steely-eyed Samantha Stosur is focusing strictly on her little-known first-round opponent after being dealt a relatively comfortable draw for the Australian Open starting on Monday.

While luckless countryman Lleyton Hewitt has yet again copped a devilish draw, fifth-seeded Stosur should have few troubles progressing to the second week of the women’s event at Melbourne Park.

Stosur faces American wildcard playoff winner Lauren Davis first up for the right to play either world No.54 Vera Dushevina or the 111th-ranked Maria Elena Camerin.

She could then meet Czech 25th seed and last week’s Brisbane International champion Petra Kvitova in the third round.

Israel’s 10th seed Shahar Peer is Stosur’s projected fourth-round opponent and, if she makes the second week, Australia’s great hope may have to knock over the world’s top three players back-to-back-to-back to end the 33-year local title drought.

Stosur is forecast to meet world No.2 Vera Zvonareva in the quarter-finals, Open favourite and third seed Kim Clijsters in the semis, with world No.1 Caroline Wozniacki seeded to make the final from the top half of the draw.

Little wonder Stosur is only, as they say in sporting circles, taking it one match at a time.

“She does not know her but is aware that she has won a lot of matches recently in both juniors and women’s events.

“Sam has also heard she is a very talented young player.”

Still, it would be a massive shock if Davis, ranked a lowly 443rd in the world, were to upset Stosur.

Hewitt, ranked 54th after missing the last four months of last year with a wrist injury, had no such luck and will take on Argentine dangerman David Nalbandian in the first round.

The Argentine reached the final this week in Auckland as he continues his own comeback from injury and has been listed by bookmakers as the Open’s sixth favourite behind the so-called Big Five of Rafael Nadal, Roger Federer, Novak Djokovic, Robin Soderling and Andy Murray.

Australian wildcard entrant Bernard Tomic meets unseeded Frenchman Jeremy Chardy in the opening round and could face 31st seed Feliciano Lopez in the second round and then potentially Nadal.

Clijsters features in the marquee women’s first-round encounter against fellow former world No.1 Dinara Safina, a finalist two years ago in Melbourne.

In other key women’s match-ups, Wozniacki faces a tricky first-round clash against Gisela Dulko, half of the world’s top-ranked doubles team.

Venus Williams – in the same half of the draw as Wozniacki – plays Sara Eranni first and 2008 champion Maria Sharapova is up against Tamarine Tanasugarn.