Lleyton Hewitt's nightmare run with grand slam draws continued today when he landed Argentine danger man David Nalbandian in the first round of the Australian Open. 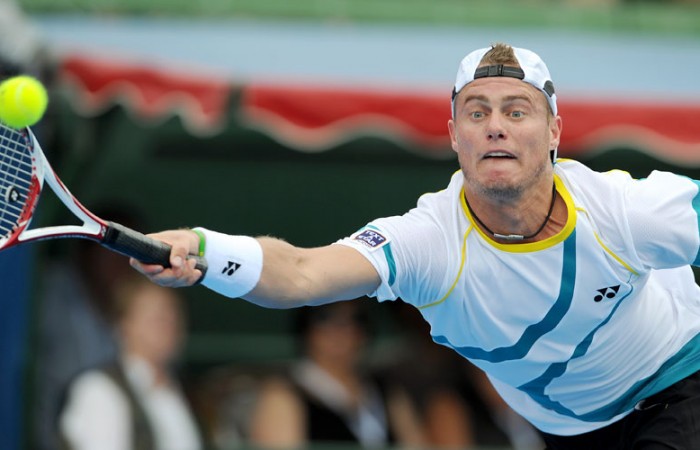 Lleyton Hewitt’s nightmare run with grand slam draws continued today when he landed Argentine danger man David Nalbandian in the first round of the Australian Open.

While fifth seed Samantha Stosur should have few troubles progressing to the second week of the women’s event, her countryman Hewitt once again must be cursing his bad luck.

The 29-year-old has repeatedly drawn 16-times major winner Roger Federer and world No.1 Rafael Nadal in the early rounds of the slams over the past few seasons.

Now Australia’s former world No.1 must defeat a revitalised Nalbandian to make any sort of run at Melbourne Park, where his best result was a runner-up showing against Marat Safin in 2005.

Like Hewitt, Nalbandian made his comeback last year from nine months out after hip surgery.

The South American showed his class when he won his 11th ATP World Tour title in Washington mid-season amid an 11-match winning streak, including seven victories over top-25 rivals.

Nalbandian has continued his revival in 2011, reaching Saturday’s final in Auckland in an ominous build-up to the Open.

Hewitt, too, will be feeling confident after accounting for world No.10 Mikhail Youzhny at the Kooyong Classic this week.

Hewitt downed Nalbandian, the Open’s 27th seed, to win the Wimbledon final in 2002.

Stosur is projected to meet world No.2 Vera Zvonareva in the quarter-finals and Open favourite and third seed Kim Clijsters in the semis.

Clijsters features in the marquee women’s first-round encounter against fellow former world No.1 Dinara Safina, a finalist two years ago in Melbourne.

If he wins that match, Tomic could face Spain’s 31st seed Feliciano Lopez in the second round and potentially world No.1 Rafael Nadal in round three.

Nadal starts his bid to hold all four grand slam titles at once against Brazil’s Marcos Daniel.

In other key women’s match-ups, world No.1 Caroline Wozniacki faces a tricky women’s first-round clash against Gisela Dulko, half of the world’s top-ranked doubles team.

Venus Williams – in the same half of the draw as Wozniacki – faces Sara Eranni first and 2008 champion Maria Sharapova plays Tamarine Tanasugarn of Thailand.