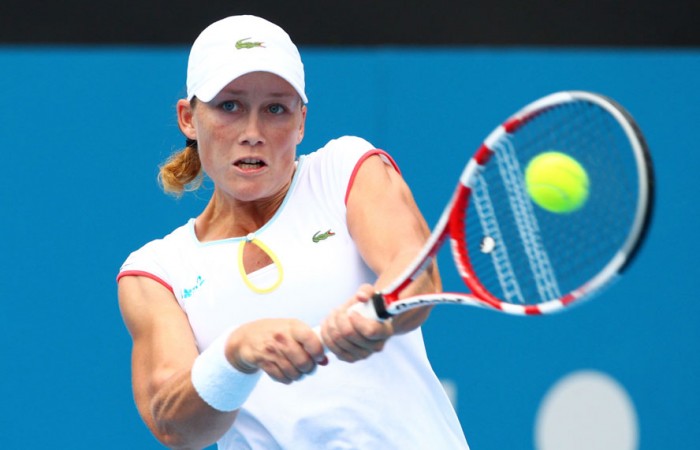 Stosur will head to Melbourne for the season-opening grand slam event starting on Monday with a moderate two-from-four record in 2011 after succumbing 3-6 6-3 6-4 to two-time major winner Svetlana Kuznetsova at the Sydney International on Tuesday.

Australia’s world No.6 also notched just a lone win at the Brisbane International, but says her game remains in sufficient shape to seriously challenge for Open honours.

Stosur bombed out in the first round last year in Sydney before rebounding with a last-16 showing at Melbourne Park.

“Even though it’s two second-round losses, I’m actually quite happy with the way I’m playing and think I’m in a good spot for Melbourne and still looking forward to obviously the Australian Open,” the French Open runner-up said.

“If I could look back on this time last year to now, I’m feeling 100 per cent better than I was. I made round-of-16, so hopefully that’s a sign that I can at least repeat that.

“I would like to think (I can win it). I’m going to go in there thinking I can.

“But there’s a long way from thinking you can do it and playing a first round to holding the trophy at the end.”

With five-time champion Serena Williams – the world No.4 – absent with a foot injury, Stosur will be Australia’s first top-five seed in the women’s event since Wendy Turnbull in 1984.

“I guess I’ve broken a few droughts recently, which is a good feeling. It’s great to be seeded top five,” she said.

“Hopefully that’s going to mean I can be in a good position. Hopefully I can live up to that seeding and get through.

“Even though Serena is out, there’s still 127 other people in the draw with me that want to do that same thing.

“There’s still everyone else that’s No.1 to 10 in the world that you’ve got to get through at the end of the tournament as well.

“She’s just one player that you’ve got in the mix that you usually have to beat.”

In a reasonably high-quality encounter, Stosur felt the turning point against Kuznetsova came midway through the second set when she dropped successive service games to love.

“I think it was a pretty decent match. I’m not too unhappy about the way I played,” Stosur said.

“I thought I played really well at the start. The whole first set was great. Just played a bad service game that second time when I lost serve and that kind of really changed the momentum of the match.

“Just a few points here and there. Overall (I’m) pretty pleased … I’m not going to freak out.”

Australia’s big Open hope is likely to wait until Friday before heading to Melbourne.

“With qualifying starting down there, it’s pretty difficult to get on court, so it might be a good idea to stay here,” Stosur said.

“I guess you’ve got to try and stay away from the rain wherever you are in this country at the moment.”