Stosur warming to the spotlight

Sam Stosur brushed aside an indifferent start to the year and declared herself ready to be scrutinised by the Australian sporting public even more in 2011 after a successful start to her Sydney International campaign on Monday. 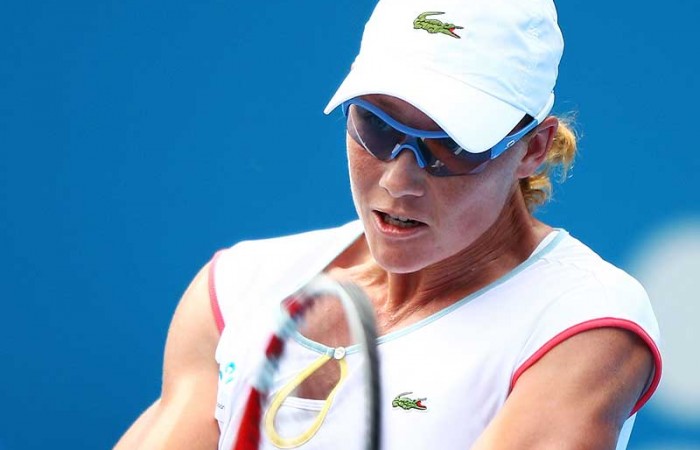 Sam Stosur brushed aside an indifferent start to the year and declared herself ready to be scrutinised by the Australian sporting public even more in 2011 after a successful start to her Sydney International campaign on Monday.

Stosur edged out gifted Belgian Yanina Wickmayer 7-5 6-4 to progress to the second round, Australia’s world No.6 looking a far more complete package compared to the player humbled by compatriot Jarmila Groth in the second round of last week’s Brisbane International.

The fourth seed’s famed served and forehand were largely on song and she also raised a few eyebrows with some pinpoint backhand crosses during vital parts of the match.

After her breakthrough 2010, which included a French Open final appearance and a career high ranking of world No.5, Stosur said she was quite prepared for more time under the spotlight after admitting to wilting a bit in the past.

“I think I’ve learned a lot from last January and all of 2010 to be honest,” said Stosur, who exited the Sydney tournament first round last year before a fourth round showing at the Australian Open.

“Maybe I was a little bit more prepared for it (the pressure) this year.

“I think you can only get better with handling it the more you experience it.

“The best players in the world have it day-in, day-out for a long period of time and I’m sure as they stay at the top of the rankings they get more used to it as now I’m trying to as well.

“It’s only a good thing that I think there is more spotlight on you and more attention – it’s probably because you are doing something better than before.”

Wickmayer, who goes under the radar in her homeland with Justine Henin and Kim Clijsters regularly flying the Belgian flag, is nonetheless a 2009 US Open semi-finalist and loomed as a potential banana skin here after making the final in Auckland last week.

But after going stroke for stroke with Stosur for much of the first set the world No.23 couldn’t keep up the pace, a broken serve at 5-5 then an early one in the second set enough for Stosur to set up a second round match with Svetlana Kuznetsova.

The Russian looms as no easier a task.

She had breezed past an out of sorts Jelena Dokic on Sunday and, while the 25-year-old may be on the wane after finishing 2010 out of the top 20 for the first time in seven years, she still has two grand slams to her credit.

And a 2-1 career record over Stosur.

Of the other women’s seeds in action on Monday China’s Li Na had little trouble in dispatching Australian Anastasia Rodionova 6-1 6-2 while Belarussian Victoria Azarenka had to go the distance to down Russian qualifier Ekaterina Makarova 2-6 6-2 6-4.