Nothing could rain on top seed Robin Soderling's parade as he comfortably claimed the Brisbane International title on Sunday. 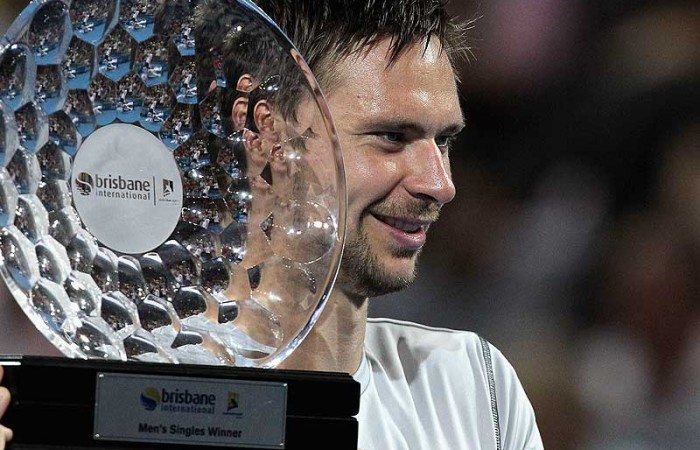 Nothing could rain on top seed Robin Soderling’s parade as he comfortably claimed the Brisbane International title on Sunday.

But heavy showers that bizarrely prompted a rain delay at the covered Pat Rafter Arena only made a bad day worse for his big name opponent Andy Roddick.

World No.5 Soderling capped a perfect preparation for the Australian Open by downing defending champion Roddick 6-3 7-5 in just over an hour and a half.

Soderling, 26, was largely untroubled by what he encountered on court, including heavy rain that postponed the indoor match during the second set.

Chair umpire Fergus Murphy called the players off court after rain that belted down outside was blown in through the gap between the stands and the roof.

The postponement at 4-4 in the second set appeared to be prompted by second seed Roddick slipping on the baseline.

During the break the world No.8 let rip at Murphy, making it abundantly clear that he would not return to the court until he deemed it safe.

“I am not getting hurt before the Open,” Roddick told Murphy.

Soderling epitomised the cool Swede as he sat without emotion during Roddick’s long outburst.

But Roddick, 28, later made it clear he was hardly the worst affected by the wet in Queensland.

The former US Open champion had pledged to donate $100 for each ace he served at the event to the Queensland government’s flood relief appeal – a tidy $5,400 after slamming down 54 for the tournament.

But Roddick vowed to double that amount after collecting the runner’s up trophy.

He could even find the funny side of the rain as he looked up at the poor souls who copped the worst of the deluge high in the stands.

“I will buy you all umbrellas next year maybe,” Roddick laughed.

Two-time French Open finalist Soderling looked in control from the outset, breaking Roddick in the fourth and sixth games to claim the opening set in 32 minutes.

And after the rain delay, it was business as usual for Soderling who finally closed out the match with an ace in his best start yet to an Australian summer.

In five campaigns, Soderling has surprisingly never advanced past the second round at the Australian Open.

“I don’t know why because it is a surface that should be very good for me,” Soderling said of his Australian Open form.

“I have never had the good results but hopefully that will change for me this year.”