An ill world No.1 Rafael Nadal suffered his first `bagel' in almost two years before recovering to beat Slovakia's Lukas Lacko 7-6 (7-3) 0-6 6-3 to reach the Qatar Open quarter-finals on Wednesday. 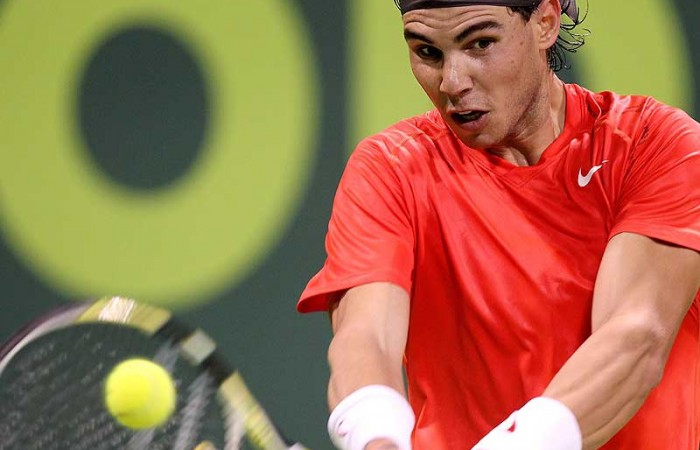 An ill world No.1 Rafael Nadal suffered his first `bagel’ in almost two years before recovering to beat Slovakia’s Lukas Lacko 7-6 (7-3) 0-6 6-3 to reach the Qatar Open quarter-finals on Wednesday.

Nadal’s second-set wipeout was only the 10th time in 575 career matches that Nadal had lost a `bagel’ set and the first time since February 2009.

The Spaniard won just 11 points in the second set, before he won the first three games of the deciding set.

Second seed Roger Federer had to fight unusually hard for the second day in a succession before reaching the quarter-finals with a 7-6 (7-5) 7-5 win over compatriot and close friend Marco Chiudinelli.

The grand slam record-holder needed to recover from 4-5 down in the first set tie-breaker and from a break of serve down at 1-4 in the second set against his fellow Swiss, ranked only 117 in the world and who had to qualify for the main draw.

“We have played against each other so many times, and today he played a strong game.

“I don’t play well when I play against a player who is a friend but I played the best I possibly can. I was concentrated a hundred percent of course, but it was hard for both of us to play our best.”

Federer did manage that however at 4-5 in the tie-break when Chiudinelli hit a great topspin backhand which dipped to Federer’s feet as he came to the net, and which looked as if it might earn the qualifier a set point against the maestro.

But Federer produced a superb half volley drop shot winner, and snatched the vital mini-break in the next rally with a solid return of serve which set up a chance for a fierce forehand winner across court.

He next plays Viktor Troicki, a member of the Serbian team which won the Davis Cup in Belgrade last month and who reached the last eight with a 6-3, 6-1 win over Teimuraz Gabashvili of Russia.

Earlier Jo-Wilfried Tsonga continued his comeback from a knee injury by reaching the quarter-finals as well.

The former world number six from France did that with an unusual finish in which two successful Hawkeye decisions in a row helped him to a 6-2, 6-4 win over Sergei Bubka, the son of Olympic gold medal pole vaulter Sergey Bubka.