Verdasco sees Brisbane as the key

Spanish drawcard Fernando Verdasco's happy memories of Brisbane have him confident of laying the platform for another memorable Australian Open assault this month. 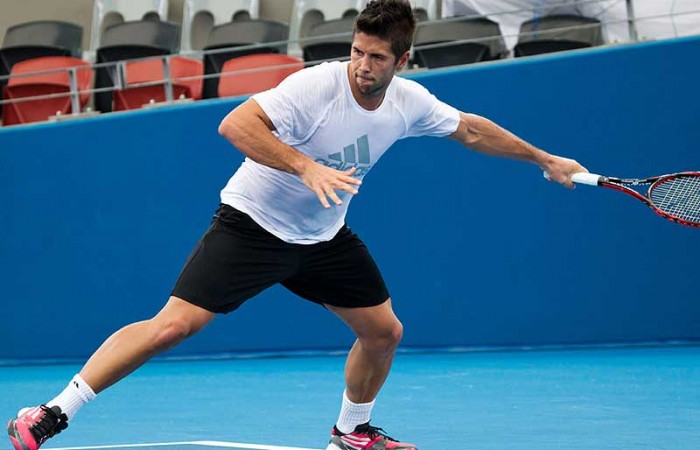 Spanish drawcard Fernando Verdasco’s happy memories of Brisbane have him confident of laying the platform for another memorable Australian Open assault this month.

World No.9 Verdasco produced his best-ever grand slam result at Melbourne Park in 2009 when he took compatriot Rafael Nadal to five sets in a marathon five-hour semi-final.

His stunning Australian Open run, which included the scalps of Andy Murray and Jo-Wilfried Tsonga, came on the back of an excellent start to 2009 at the inaugural Brisbane International.

Known mainly for being Ana Ivanovic’s boyfriend at the time, Verdasco became a massive crowd favourite on losing a tight final to Radek Stepanek before vowing to return to Queensland to win an event that had caught his heart.

The 27-year-old felt his injury-related absence from the 2010 Brisbane International affected his chances at Melbourne Park, and also impacted on the rest of his year, which faded badly after a quarter-final loss to Nadal at the US Open.

“I’m happy to start my year here in Brisbane after last year I couldn’t come because of injury and the Davis Cup (finals victory in December),” he said on Saturday.

“In a new season it’s important to start as well as possible and I think the performance I had two years ago was thanks to the level (reached in Brisbane).

“I made the finals in both the singles and doubles and part of the reason I came again was to try to get that confidence and rhythm in my game and take it to the Australian Open again.”

A huge football and Real Madrid fan, Verdasco spent some time warming up for his first round encounter against German Benjamin Becker with a kick around with Socceroos midfielder Matt McKay.

Most first-round interest in the men’s draw will surround local wildcards Bernard Tomic and Marinko Matosevic.

Matosevic, who won the Australian Open playoff final a month ago, has drawn defending champion and second seed Andy Roddick, while Tomic will play No.7 seed Florian Mayer.

The other Australian in the main draw, local Brisbane hope John Millman, will play a qualifier but faces a likely second round match against top seed Robin Soderling, who is flying in from the Middle East on Sunday, if he wins first up.

Roddick and Matosevic are set to headline action at Pat Rafter Arena on Monday night but tournament organisers hope Brisbane’s wet weather clears for the American world No.8 to play doubles on an outside court on Sunday with Mardy Fish.