Top seed Samantha Stosur faces a first-round qualifier but must overcome compatriots Jarmila Groth and Jelena Dokic to make the semi-finals at her home tournament at the Brisbane International this week. 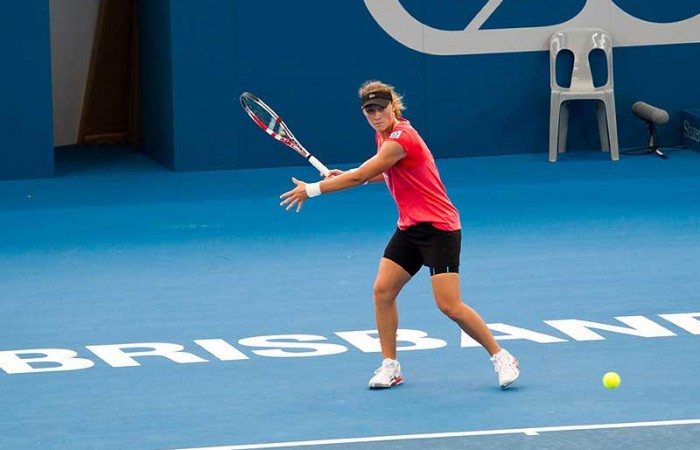 Top seed Samantha Stosur faces a first-round qualifier but must overcome compatriots Jarmila Groth and Jelena Dokic to make the semi-finals at her home tournament at the Brisbane International this week.

World No.6 Stosur would have mixed feelings after the draw was held on Saturday afternoon, with friend and sometime hitting partner Groth a likely second-round opponent at the Queensland Tennis Centre.

Groth has risen to 41st on the world rankings after finishing 2010 strongly, which included a maiden WTA singles title in Guangzhou, China.

The Slovak-born 23-year-old must beat Spaniard Aranxta Parra Santonna in the first round to gain a likely shot at Gold Coaster Stosur.

If the Fed Cup squad-mates play off in the second round, former world No.4 Dokic could be laying in wait as her name bobbed up in the same quarter of the draw.

On her way back from a disappointing 2010, Dokic will also meet a qualifier in the first round on Monday, while fellow wildcard Sophie Ferguson was unlucky to draw Israeli second-seed Shahar Peer.

Commonwealth Games gold medallist Anastasia Rodionova would be favoured to beat Russian Bojana Jovanovski, which would set up a difficult second-round meeting with another Russian, fifth-seed Anastasia Pavlyuchenkova.

In the men’s draw, wildcard and Australian Open playoff winner Marinko Matosevic faces the toughest of tasks after drawing defending champion Andy Roddick in the first round.

Young gun Bernard Tomic, who has failed to win a match in Brisbane in two previous attempts, again has an awkward match after drawing seventh seed Florian Mayer.

The third Australian wildcard, local hope John Millman plays a qualifier in the first round but would likely meet Swedish top-seed Robin Soderling in the second round.