Six more years. That’s how long Jelena Dokic said she would like to continue playing for when she spoke to the media on Thursday outside Brisbane’s Pat Rafter Arena. 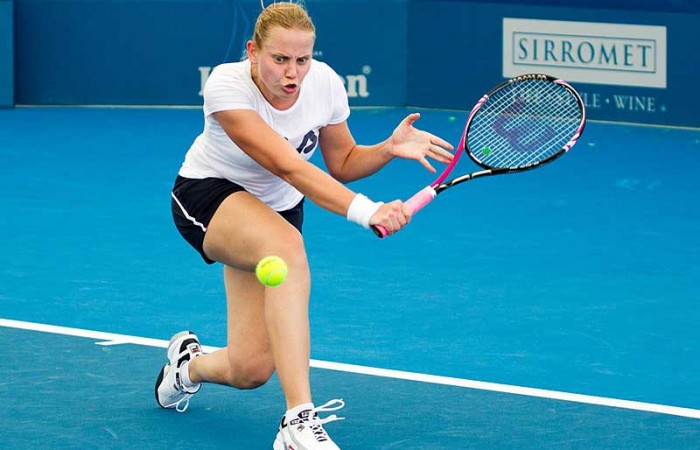 Six more years. That’s how long Jelena Dokic said she would like to continue playing for when she spoke to the media on Thursday outside Brisbane’s Pat Rafter Arena.

The 27 year old was awarded a wildcard into the Brisbane International several weeks ago, and more recently free passes into the Australian Open and the Medibank International Sydney, and has arrived in Brisbane hoping to create some havoc on the court and perhaps cause an upset or two.

“The fact that I got a wildcard into all of them I would like to take advantage of that and get some wins maybe, and get some points and get my ranking up.”

This is Dokic’s third trip to Brisbane, but she’s yet to make it past the first round.

“I love this tournament, I played here the first year when it came and I’ve always had tough draws but it’s been a good preparation.”

Two weeks later she would charge to the Australian Open quarterfinals against all the odds.

And last year she was unlucky to face another former No.1 in Ana Ivanovic – this time she went down in three sets.

A loss that Dokic says came about in part due to the weight of expectation that had been following her since her stunning return to form at Australian Open 2009.

“Last year [there] was much more [expectation] and I think it played its part. I had a lot of pressure on me and I didn’t play great here or in Hobart or in Melbourne, especially Melbourne.

“I have no pressure on me this time and I feel like I’m in much better physical shape but also with my tennis I’m much more relaxed, I’m playing well and I’m really looking forward to 2011.”

Despite the early exits, Dokic still rates Brisbane as a great place to prepare for the first Grand Slam of the year.

“It’s very hot and humid here, so you really get ready and I’m really grateful to have gotten a wildcard.”

This year Dokic comes into the event with some solid match practice behind her, having made it to the final of the Australian Open Wildcard Play-off where she lost in three-sets to Melbourne teenager Olivia Rogowska.

Since then she says she has spent a week working on her fitness and the past few days finetuning her frightening ground strokes with coach Glenn Schaap ahead of the main draw, which begins on Sunday.

And, Dokic says, she has added more variety to her game to complement those devastating ground strokes.

“We’ve worked a lot on getting a lot of balls in, finishing the point when I can and still being aggressive but at times being able to mix up my game if things are not going great.

“I’ve also worked a lot on my serve and my return and I really think that’s got a lot better, all I need now is just matches.”