The finals of both the boys and girls Optus 14s Australian Championships were completed today with third-seeded Harry Bourchier taking out second-seeded Daniel Guccione 6-2 6-3 in the boys, and third-seeded Brigitte Beck defeating the eighth seed Annabelle Andrinopoulos 6-0 6-4 in the girls. The consistent Bourchier became the first Tasmanian to win the… 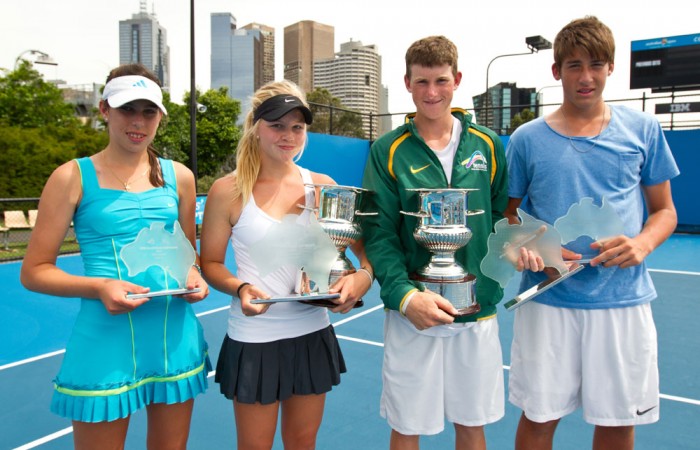 The finals of both the boys and girls Optus 14s Australian Championships were completed today with third-seeded Harry Bourchier taking out second-seeded Daniel Guccione 6-2 6-3 in the boys, and third-seeded Brigitte Beck defeating the eighth seed Annabelle Andrinopoulos 6-0 6-4 in the girls.

The consistent Bourchier became the first Tasmanian to win the 14s Australian title since Richard Fromberg lifted the trophy in 1984. In today’s match, Bourchier was instantly off to a flying start, breaking the erratic Guccione to go up 3-0.

Moving his towering opponent around the court, Bourchier was able to break down the Guccione forehand with relative ease, drawing an array of unforced errors from the stronger wing of Guccione. Despite saving set points at 5-2, Guccione’s resolve was eventually broken by the Tasmanian in the opening set.

The return of Bourchier was also a major factor in the match, as the Guccione serve is always “tough to break down,” said Bourchier. Conceding that the only option was to “stand back” in the court, the more nimble of the two was able to square off against the Guccione delivery, which dented the confidence of the Victorian.

Prior to the start of the second, Guccione received treatment for what appeared to be an abdominal injury. Once the two resumed, Bourchier showed little resistance, racing to a 3-0 lead with some scintillating tennis. However, Guccione refused to fold, breaking his rival back to bring the score to 3-2.  In response, the agile Bourchier raised the level of his play, a single break sealing the fate of his opponent 6-3.

Bourchier conceded that he didn’t “play as well as [in] the semis or the quarters”, he was elated after his win, labelling it the biggest of his young career so far. He next travels to the US to visit his brother and sister who are pursuing careers in college tennis – a future aspiration for the youngster.

The girls’ final was off to a similar start, Victorian Brigitte Beck overwhelming fellow Victorian Annabelle Andrinopoulos with a 5-0 lead. Beck said her aim was to come out “really strong and really aggressive”. Brimming with confidence, she took the opener without the loss of a single game, cracking the seemingly brittle Andrinopoulos.

Nevertheless, a tight hold at the start of the second set to even the match at two games apiece imbued Andrinopoulos with newfound resolve, as winners began to flow from her racquet as well.

As the windy conditions offered the players little respite in the second set, Beck’s game appeared to tighten, highlighted by Andrinopoulos’ break to go up 4-3. Yet that was as far as the eighth seed was allowed to progress in the match, as Beck capitalised on the negative body language of Andrinopoulos to take the second set 6-4.

Beck could offer nothing but praise for her opponent after the match, commending her “aggressive and deep shots, especially in the second set”.  Hailing from the National Academy and coached by Mark Hlawaty and John McCurdy, Beck often trains alongside Andrinopoulos, and despite the result of today’s final the pair remains “best friends”.