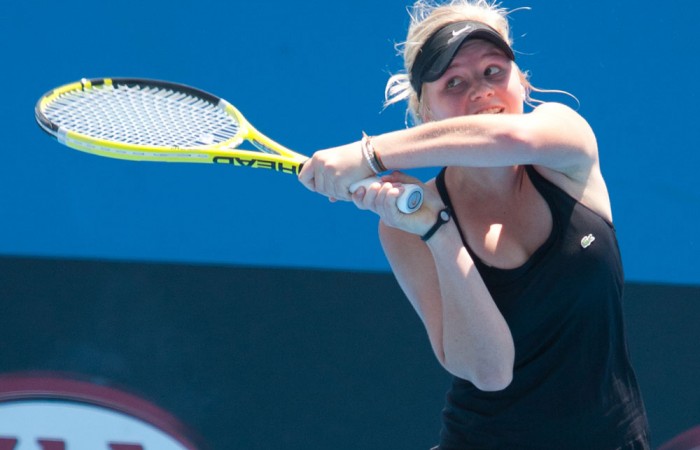 Similarly, the girls draw featured its share of upsets, with third seed Brigitte Beck of Victoria defeating the tournament’s top seed Lyann Hoang of Queensland 6-2 6-0. Facing her in the final will be the eighth seed Annabelle Andrinopoulos of Victoria, who routed sixth seed Anja Dokic of Western Australia, 6-2 6-2.

Mousley, 14, was already a winner in March 2010, taking out the under 14s National Claycourt Championships to establish himself as one of Australia’s most promising juniors.  However, against the quiet achieving Bourchier, the third seed, he was plagued by errors from the back of the court.

The Bourchier forehand was lethal throughout the match, dismantling the Mousley game with an array of winners and forcing a number of errors.  The South Australian completed the upset 6-1 6-2 to secure a place in the final.

On the other side of the draw, Daniel Guccione cruised through to the final in a similar fashion, tearing apart the game of Bataljin. Guccione, nicknamed ‘House’ for his huge serve and well-built frame, faced little resistance in his encounter with the South Australian, winning the first set 6-2 and cruising through the second without the loss of a single game.

If the quality of today’s play resonates in the final, the match should be a scorcher.

In the women’s draw, the upset trend continued with Andrinopoulos breezing past the higher seeded Dokic to reach tomorrow’s final. Dokic, 13, has shown promise in her young career, winning the Optus 12s Australian Junior Championships in December 2009 and later the Optus 12s Grasscourt Championships in Mildura in early 2010.

However, the consistency of Andrinopoulos worked to break down the feisty lefty, who promptly surrendered a 5-0 lead in the opening set. Frustration was clearly evident in the body language of the Western Australian, who surrendered the first set 6-2.

Despite a competitive final game, due in part to the double faults of Andrinopoulos, the Victorian closed out the second set by the same score, booking a place in the final against fellow Victorian Brigitte Beck.

Meanwhile, Beck, the third-seeded Victorian, made light work of Lyann Hoang. The more solid Beck defeated the relatively subdued Hoang with some blistering backhand winners. An Australian representative and bronze medallist in the 2010 World Junior Teams Competition, Hoang had cruised into the semifinals without the loss of a single set. Yet against the more determined Victorian, Hoang could muster little resistance, folding in the second set without winning a single game.

Interestingly, tomorrow’s final will not be the first meeting between these two youngsters.  Earlier in 2010, the pair of Victorians faced off in the New Zealand 18s and Under Indoor Championships, with Beck prevailing with relative ease 6-1 6-2  in the round of 32. However, there is no doubt that tomorrow’s final will carry greater significance for the pair, who will battle for a National Championship.

The finals of both the boys and girls events will involve some tantalisingly close tennis, with the finalists all riding a wave of momentum into tomorrow’s matches.

Both the boys’ and girls’ finals will begin at Melbourne Park at 9:00 am on Tuesday and will be followed by the Optus 14s Australian Championships doubles finals.