he Australian Tennis Awards have been announced at Melbourne Park tonight, with Newcombe Medalist Sam Stosur's coach Dave Taylor also among the winners, claiming the Coaching Excellence award in the High Performance Category. Taylor began coaching the 2010 French Open finalist during her 2008 lay-off with Lyme Disease, and has since guided the… 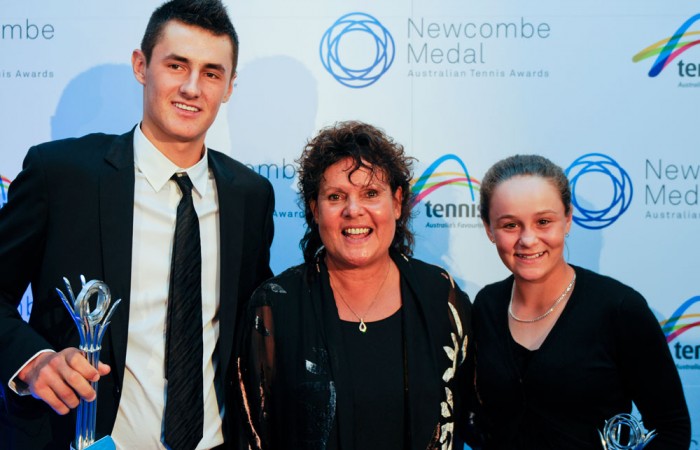 he Australian Tennis Awards have been announced at Melbourne Park tonight, with Newcombe Medalist Sam Stosur’s coach Dave Taylor also among the winners, claiming the Coaching Excellence award in the High Performance Category.

Taylor began coaching the 2010 French Open finalist during her 2008 lay-off with Lyme Disease, and has since guided the Queenslander to lofty heights, with Stosur finishing the year at World No.6. Her fitness and self-belief in that time have skyrocketed, transforming her from top doubles player to a singles Grand Slam contender.

With a coaching record that speaks for itself, Taylor has also captained the Australian Fed Cup team, overseen the career of Martina Hingis and helmed Alicia Molik’s rise from No.50 to top 10 player, cementing his reputation as a premier coach not only nationally but worldwide.

Others to be recognised tonight were two of the brightest hopes in Australian tennis, with Bernard Tomic and Ashleigh Barty winning the respective male and female Junior Athlete of the Year awards.

Tomic, who became the youngest man to ever win an Australian Open match in 2009, continued his ascension into the senior ranks on the ATP Tour. Granted a wildcard into the 2010 tournament, he yet again won his first-round match and pushed 14th seed Marin Cilic over five epic sets before falling just short of what would have been the biggest win of his career to date.

Undeterred, Tomic entered and won the ITF event in Burnie and soon after made his Davis Cup debut against Chinese Taipei, winning both his singles rubbers. The 18 year old is currently ranked at a career high No.208.

Barty, at just 14 years of age, is already seen as the next bright hope in women’s tennis in Australia. With a swag of Optus Junior Championships to her name, Barty has also won an ITF 18s event.

Coached by long-time mentor Jim Joyce and more lately Scott Draper, Barty was one of only three players to remain undefeated at the ITF World Junior Team Championships, helping the unseeded Australians to a bronze medal.

There was also due recognition for Dani Di Toro as the Most Outstanding Athlete with a Disability. One of the elite players in women’s wheelchair tennis, Di Toro had a remarkable year in 2010 with singles appearances in the Australian Open quarterfinals and both the French and US Opens. In doubles, she was even more dominant, reaching the final of all four majors with partners Lucy Shuker of Great Britain and Aniek Van Koot of Holland, winning the French Open with the latter. The veteran 36 year old finished the year as the No.2 singles and No.3 doubles player in the world.

Finally, Australian journeyman and tour “good guy” Peter Luczak was announced as the winner of the Spirit of Tennis Award. The popular Luczak, who splits his time between Sweden and Melbourne, was acknowledged for his exemplary conduct and attitude towards the game.

“I like to think people think of me as a good sportsperson, I’m out there and I try to give back to the game and so it’s a massive honour for me,” said Luczak after receiving his award.

Most Outstanding Athlete with a Disability
Daniela di Toro, Vic