The exciting summer of tennis is just around the corner and to take it to a whole new level, the first nationwide Australian Open Trophy Tour has hit the road and will visit Rockhampton on Thursday 25 November 2010. Acting Mayor of Rockhampton, Cr Rose Swadling, students of Rockhampton Grammar Primary School and Mr Geoff Hadwen, Head of Primary, will be… 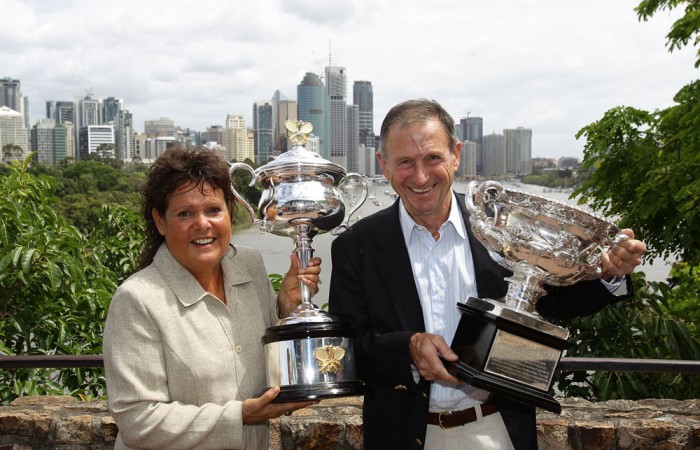 The exciting summer of tennis is just around the corner and to take it to a whole new level, the first nationwide Australian Open Trophy Tour has hit the road and will visit Rockhampton on Thursday 25 November 2010.

“The students and staff of The Rockhampton Grammar Primary School are delighted to have both the men’s and women’s championship trophies visiting our school,” Mr Geoff Hadwen, Head of Primary said.

“Tennis is a sport that our school not only encourages, but promotes. We currently have four quality courts and more than 50 students are currently playing fixtures or are involved in coaching lessons. Our school also won the A grade and B grade tennis championships in Rockhampton this year and we have two shadow Queensland under 12 tennis players.

“Thank you to all involved, especially Tennis Australia, for not only promoting this sport but providing our future tennis players with a chance to see one of the greatest prizes on offer in tennis,” Mr Hadwen added.

Eden and Nikita are two of six females from the Rockhampton area who will soon be graduating as Tennis Australia Junior Development coaches and becoming Tennis Australia Qualified Coach Members. The other coaches are Chloe Bidgood, Dayle Mitchell, Leesa Bongers and Helan Ambrey.

MLC Tennis Hot Shots Ambassador and former world No.8 Alicia Molik said, “Bringing the magnificent Australian Open trophies to regional areas and cities across Australia is a great way to build the excitement and get everyone thinking about the Australian Open in January.”

“I wish MLC Tennis Hot Shots was around when I was starting out. I have no doubt it will help inspire our tennis stars of the future.

“The MLC Tennis Hot Shots program lets kids learn the sport quickly and easily, build their confidence and also gets them active through playing sport.

“Using the modified equipment makes it easier for beginners to start playing the game, and it is a great way to introduce kids to tennis.”

For the first time in Australian Open history, the winner of the men’s and women’s singles titles will take home an exact full-size replica trophy instead of the miniature replica past champions have received.

“It’s a fantastic coup for the people of Rockhampton to have the opportunity to get up close and personal with the Australian Open Trophies; two of most famous trophies in world sport,” Cr Swadling said.

The Rockhampton leg of the Australian Open Trophy Tour coincides with Tennis Queensland’s Festival of Tennis at the new Rockhampton Regional Tennis Centre from 3:30 pm to5:30 pm.

Tennis fans are invited to attend this free event and feel like a Grand Slam® champion as they enjoy their very own photo opportunity with the Australian Open Trophies, and participate in fun tennis activities and the MLC Tennis Hot Shots program.

Following the Rockhampton visit the trophies will head to Bendigo before finishing their journey at Melbourne Park on Monday 17 January, day one of Australian Open 2011.

Fans can follow the trophies around the country online by visiting australianopen.com.au/trophy.