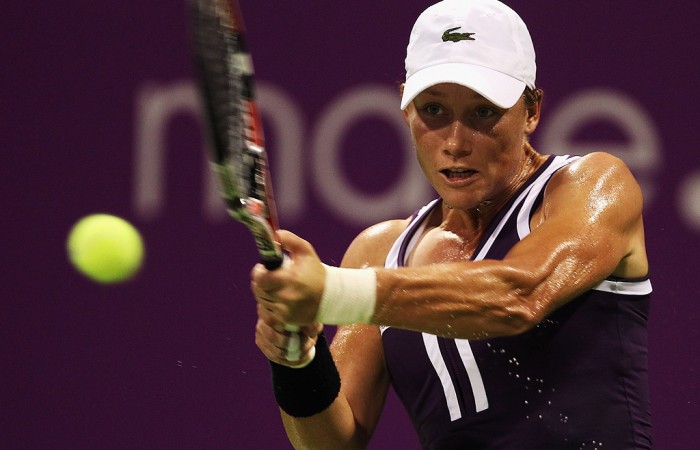 Clijsters survived a car crash en route to the Khalifa Tennis Complex on Saturday and then had to pull out all stops to deny Stosur 7-6(3) 6-1 in a high-quality semifinal.

Despite the defeat, Stosur will rise one place in the rankings and finish 2010 at No.6 in the world, the highest of any Australian woman at season’s end since Wendy Turnbull in 1984.

Clijsters has noticed vast improvements in Stosur’s game and felt it was “only a matter of time” before the 26-year-old broke through and won a slam.

“Sam has always been a player who had a strong serve, had a big forehand, but I think her big weakness in the past was still her movement, and I think that’s something that she’s really, really worked on,” the three-time US Open champion said.

“And now also when you see her going for the wide forehand, she really steps it up there.

“She just looks physically a lot stronger as well. Her best game was always good, but I think now she’s been able to consistently have it there.

“Obviously she’s had some chances to win some big events at the French Open – but it will happen. She’s too good of a player not to win a big one. It’s only a matter of time … I think it will happen for her.”

The Belgian supermum believed it could even happen for Stosur at the Australian Open in January, saying Melbourne Park’s Plexicushion surface was tailor made for the Queenslander’s unique power game.

“It just gives her that little bit more time to really swing her racquet and get under the ball and hit with that heavy topspin,” Clijsters said.

“The serve as well, it’s a very tough serve. When she kicks it out wide, it’s tough to return.

“So she definitely has a totally different game to what we’re used to. She’s been a really good doubles player and now she’s been able to pass that through into her singles career.”

In addition to reaching the French Open final, plus the last eight at the US Open – where she also lost to Clijsters – and being the first Australian to make the semifinals of a season-ending championship since Turnbull in 1982, Stosur inflicted the only grand slam defeat of the year on 13-times major winner Serena Williams.

That triumph came at Roland Garros, where she also upstaged four-time champion Justine Henin, just before climbing to her career-high of No.5 in the world.

Stosur was also the only player to knock over two world No.1s in 2010 – the then top-ranked Williams in Paris and Caroline Wozniacki this week in Doha.

“Last year I thought was the best year I had on tour and now this year I’ve well and truly passed that.

“It’s really pleasing to know that I’ve been able to sustain it for another year and really be more consistent throughout the whole time and overall play much better tennis.

“I’m always improving as a player and that’s showing in the results.”