Bullet-proof Belgian Kim Clijsters has overcome a car crash to end Samantha Stosur's title charge at the WTA Championships in Doha. Clijsters' courtesy car was struck so heavily it was abandoned by the side of road before the US Open champion recovered from the scare to down Stosur 7-6(3) 6-1 in their semifinal on Saturday. Clijsters and… 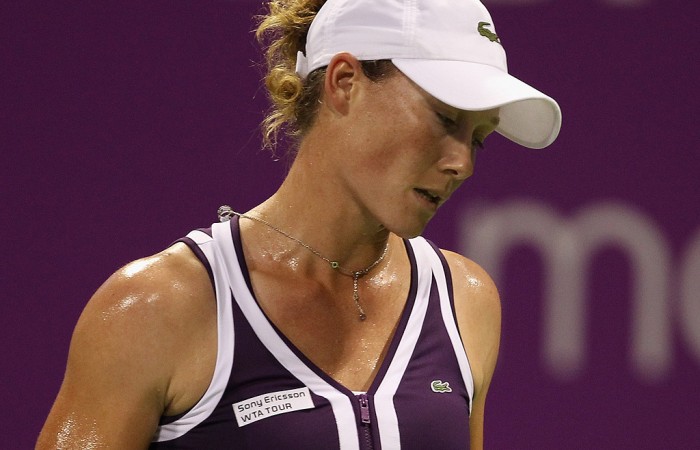 Clijsters’ courtesy car was struck so heavily it was abandoned by the side of road before the US Open champion recovered from the scare to down Stosur 7-6(3) 6-1 in their semifinal on Saturday.

Clijsters and her manager Bob Verbeeck were en route from her hotel to the Khalifa Tennis Complex and were approaching a roundabout where another vehicle appeared to have smacked into a passenger’s door.

A WTA spokesperson described it as “just a minor accident” but it was serious enough to delay Clijsters’s arrival to the venue after having to wait for another vehicle to arrive.

“We just had a car accident on our way to the courts! So scary……Bob, my manager took the hit,” Clijsters said on Twitter.

“We are all okay ….Just the car is ready for the junk yard,” she concluded.

Clijsters will now play world No.1 Caroline Wozniacki in the title match after the Dane beat the second-ranked Vera Zvonareva 7-5 6-0 in the second semifinal.

The first Australian to reach the last four at the eight-woman season finale in 28 years, Stosur had been bidding to emulate the great Evonne Goolagong Cawley’s championship efforts of 1974 and 1976.

Instead, Clijsters has the chance to collect a third title, after going back-to-back in 2002-03 in Los Angeles.

Despite the defeat, Stosur will rise one place in the rankings and end the season at No.6 in the world, just one spot below her career-high of fifth that the 26-year-old reached in July.

Alas for Stosur, a matter of millimetres on two huge points ultimately decided it in the Belgian’s favour.

After surrendering a 3-0 advantage, Stosur rebounded impressively to conjure a set point at 5-4 on Clijsters’ serve.

Stosur thought she’d won the set when Clijsters caught the line with a backhand down the line, the Australian unsuccessfully challenging the call.

Clijsters again caught the line to grab a decisive break late in the tiebreaker to pocket the opening set and Stosur was unable to sustain her high level in the second, dropping serve in the second and sixth games.

Stosur said while it was “always a little bit disappointing” to bow out of a tournament, victories over Wozniacki and her French Open final conqueror Francesca Schiavone on her singles debut at the championships were a great way to end the year.

“I’m pleased with the way that I’ve played here,” she said.

“It’s always important to do well against those kind of players, no matter what tournament is.

“But the last one of the year, everyone wants to do well. You always want to finish on a good note rather than a bad one.