Much more than a one-hit wonder, Samantha Stosur crashed Caroline Wozniacki’s party at the WTA Championships to become the first player this year to conquer two world No.1s. Oozing confidence after a 6-4 6-3 destruction of Wozniacki maintained her unbeaten record in Doha, Stosur said there was no reason she couldn’t go all the way and break… 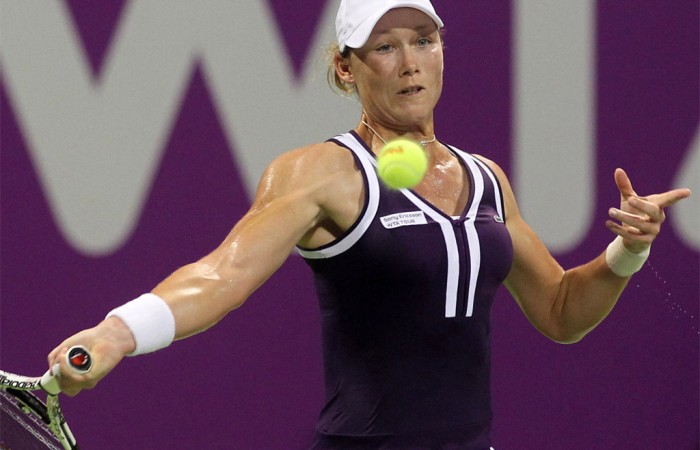 Much more than a one-hit wonder, Samantha Stosur crashed Caroline Wozniacki’s party at the WTA Championships to become the first player this year to conquer two world No.1s.

Oozing confidence after a 6-4 6-3 destruction of Wozniacki maintained her unbeaten record in Doha, Stosur said there was no reason she couldn’t go all the way and break Australia’s 34-year title drought at the women’s season-ending championship.

“It’s all coming together,” Stosur said after soaring to the top of the Maroon Group with her second successive straight-sets win.

“If I can get through this group, then I think anyone’s got a chance, so I’m really looking forward to it and hopefully I can keep playing like this.

“It’s safe to say I’ve been able to find my form right at the right time … if you can beat a player like Caroline in straight sets here at such a big event, then it’s fantastic.

“It definitely gives you more hope and lots of confidence.”

Wozniacki had won 30 of her previous 32 matches, a hot run that yielded the Dane five titles since Wimbledon and had her poised to clinch the year-end No.1 ranking with victory over Stosur.

But like French Open champion Francesca Schiavone discovered in a 6-4 6-4 defeat on Tuesday, Wozniacki had no answer to the Australian’s firepower, Stosur plundering five aces and countless other unreturnable serves and forehand winners.

“In the second set, I just found it difficult to return her serves. And she’s hitting with a lot of spin.

“She’s playing different than the other girls.”

Stosur also upset the then top-ranked Serena Williams in the French Open quarterfinals in what proved to be the American superstar’s only Grand Slam loss of the year.

“Yeah, it’s a good achievement. Whenever you can do that in your career, that’s a good thing,” Stosur said.

“But I guess to do it here and at the French, they’re two big tournaments where it means a lot to everyone who’s competing, so I’m very, very pleased with that.”

The fifth seed was scheduled to face struggling Russian Elena Dementieva in her final round-robin match on Thursday (1 am Friday AEDT) and only needed to win one set to secure a semi-final berth in her maiden singles appearance at the prestigious season finale.

Even a narrow loss was likely to be enough for Stosur to progress in her quest to join Evonne Goolagong Cawley (1974 and 1976) as the only Australian on the honour roll.

The 26-year-old collected two season-ending doubles titles in 2005-06 with American Lisa Raymond and a singles crown would complete a rare double that only Martina Navratilova, Martina Hingis, Jana Novotna and Lindsay Davenport can boast.

For Wozniacki, the champagne remained on ice after second seed Vera Zvonareva beat Victoria Azarenka 7-6(4) 6-4 to join Stosur with a two-from-two record and remain a mathematical chance of snatching the year-end top ranking.

In Wednesday’s other match, two-time champion Kim Clijsters launched her bid for a third WTA Championship with a 6-2 6-3 win over Jelena Jankovic.