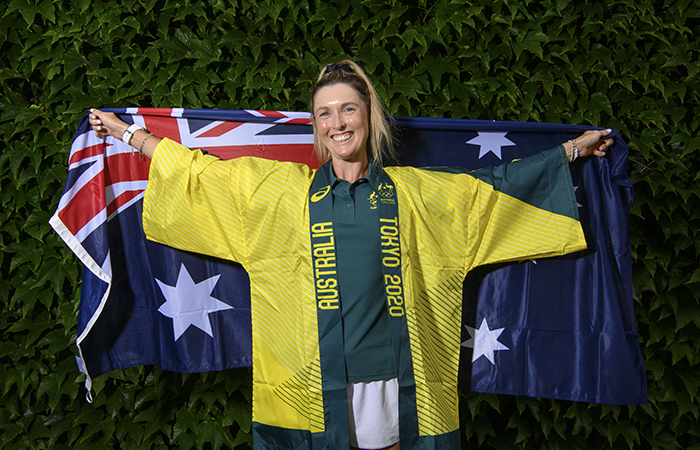 Continuing her bumper year, WA’s Storm Sanders will make her Olympic debut after yesterday being named in the 11-strong Olympic Tennis Team alongside World number one Ash Barty and World number 15 Alex de Minaur. Rio Olympian John Peers, who now calls Perth home, will also return to the team for his second Games.

Sanders, who was raised in Secret Harbour and trained at the WA State Tennis Centre for most of her junior career, has recently soared to a career high singles and doubles ranking after a stellar 2021 season. The 26 year old now boasts a current doubles ranking of 59 and a singles ranking of 147, an improvement of more than 100 places in less than 6 months.

The talented left hander, who last month qualified in the main draw at Roland Garros, is enjoying a career-best run. Her main draw appearance was made possible through gritty wins in the qualifying rounds, including a defeat of former French Open Finalist Sara Errani (ITA) in a three set thriller.

It’s a remarkable rise for Sanders, who only a few years ago decided to focus primarily on doubles. Since returning to singles in October 2019, the tenacious leftie has produced the best tennis of her career, including reaching a first WTA-level quarterfinal at the Adelaide International in February.

Despite her recent achievements, Sanders admitted she was shocked, but absolutely honored by her Olympic selection.

“Growing up I always dreamed of representing Australia at the Olympics, but I didn’t think it would actually happen. I just can’t wipe the smile off my face.”

“I remember watching the Sydney Olympics with my family as a child, so to think that people are going to be sitting with their families watching me compete at the Games is an incredible feeling”.

Given the strength and depth of the Australian squad, Sanders is confident with her team’s Medals chances.

“I definitely think we can produce medals. We have a really good team and a good culture, so watch out!” Sanders said.

Sanders will team up with World number one, Ash Barty in the doubles. A pairing both girls are looking forward to.

“I’m excited to play doubles with Storm, she’s a childhood friend of mine and we’ve played a lot together from when we were young. So to be able to live out this dream with her is really, really special.” Barty said.

Tennis Australia CEO Craig Tiley said he was looking forward to seeing one of the country’s biggest and strongest tennis teams head to Tokyo.

“Our players are always proud to step up and compete for Australia and it’s fantastic to see our biggest ever Olympic tennis team, and one of our strongest, named for Tokyo next month,” Tiley said.

“Grand Slam champion Sam Stosur is clocking up another incredible milestone and will compete in her fifth Olympic Games, which is an amazing achievement.

“Eight players will make their debut, led by world number one Ash Barty and Alex de Minaur, who reached a career high ranking of 15 this week. John Millman and John Peers will compete in their second Olympic Games. We wish the team well in Tokyo and look forward to supporting their journey.”

The tennis team announcement takes the number of athletes selected for the Australian Olympic Team for Tokyo to 320 of an expected 450-480 team size.

*Note Mixed Doubles entries are submitted on site on 27 July

The Tennis competition will run from 24 July – 1 August at Ariake Tennis Park.

Catch all the latest team info, stats and athlete bios at www.olympics.com.au/games/tokyo-2020/team/