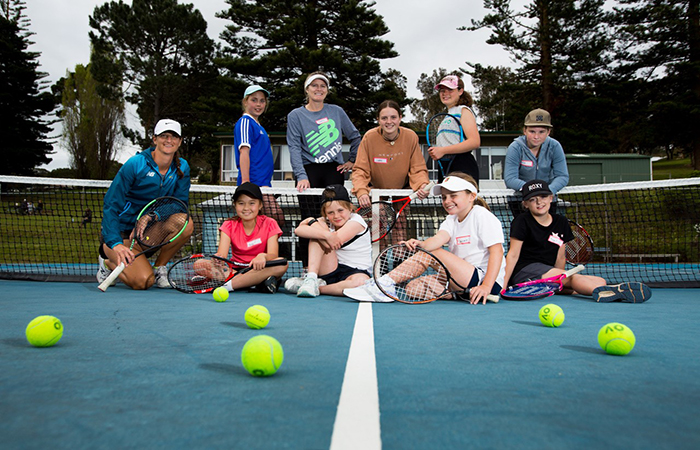 Twenty Eight aspiring female tennis players from across the Lower Great Southern region were some of the first junior athletes in Australia to benefit from the all new Tennis Australia Females in Tennis Development Camp, which launched on Friday at Lawley Park Tennis Club (Albany).

Aimed at amplifying opportunities for girls and women in tennis, Albany played host to the first of 25 camps being rolled out across the country; with the free camps being funded under the 2019 Federal Government’s $12 million commitment to women and girls in tennis.

In looking to reflect what is being seen in the modern women’s game and identifying the unique differences of playing and competing as a female player, the camp focused on skill development, peer connection and unique experiences within tennis.

WA Talent Operations Manager, Emma Hayman was delighted with the success of the camp.

“The Females in Tennis Development Camp in Albany was a huge success. It was a day jam-packed with activities both on and off the court”

“A huge focus was around one of our really important Tennis Australia Wellbeing pillars “Connection”. We had 28 smiling faces throughout the day, which was a fulfilling sign. This proved to us that the girls where enjoying themselves and making new friendship connections on and off the court.”

“There were a number of activities centred around communication and teamwork, which encouraged the girls to talk to one another and form new friendships by working together and hopefully feeling a sense of belonging in the Australian Female Tennis Community.”

“On court we explored the drive volley, and the fundamentals surrounding the shot. We watched vision of some of our top Australian Female players, took notes, and then went and explored the shot on the court, progressing the shot into fun games on the court in small teams.”

“We (the coaches) absolutely loved Albany, the place, the people and the support from the community in Albany was incredible.”

“We actually couldn’t have thought of a better place to start these camps. The entire community got behind this new initiative, the local support we received was exceptional.”

“One of the highlights, was seeing the progressions and improvements on the court over the day. The girls were challenged with a few of the strokes and drills, and the coaches saw them work together and they really progressed well from the start of the day to the end of the day. Not only on the court, but it was also great seeing them connect and make friends with girls who they had never met before.” Ms Hayman said.