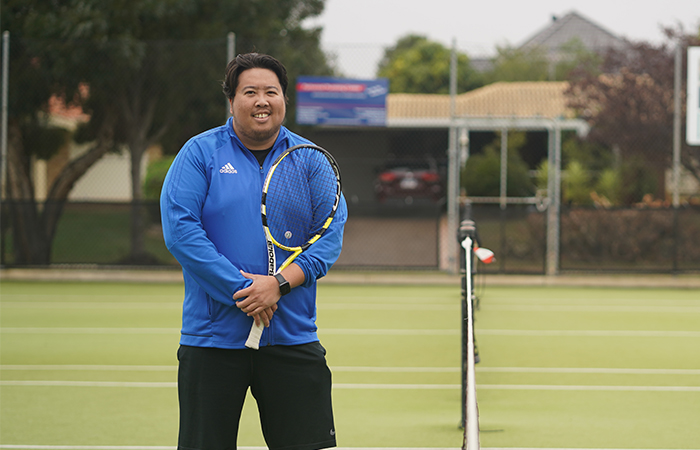 With a lifetime commitment to creating positive change, Dwayne Augustin has spent the past nine years volunteering his efforts at the Manning Tennis Club, determined to build a welcoming and inclusive environment for the benefit of the wider community.

Inspired by Mahatma Ghandi’s quote ‘Be the change that you wish to see in the world’, the 2019 Tennis Industry Volunteer Achievement Award Finalist has been instrumental in the club’s ongoing development, including court resurfacing, the introduction of online court booking system Book-a-Court and the appointment of the new club coach Mike Gill, who Augustin has been working alongside to bring wheelchair tennis and tennis for people with disabilities to the club.

Championed by the theme ‘Changing Communities. Changing Lives’, the upcoming National Volunteer Week will see Augustin’s tireless efforts recognised and celebrated throughout the week of May 18-24.

A tennis enthusiast for more than 25 years, Augustin joined the club after relocating to Perth in 2005.  In more recent years, Augustin and Club Coach Mike Gill have focused their efforts to bringing the benefits of tennis to people of all abilities.

‘The goal is to create a sustainable, adaptive tennis program which breaks down barriers to make it as easy as possible for anyone who wants to play tennis, to be able to do so,’

‘By recognising the unique challenges faced by people with different abilities and working to create an environment which removes as many of those barriers as possible, tennis can be enjoyed by everyone,’ Augustin said.

Recognising the important role tennis clubs offer the wider community, Augustin highlights that their existence, like that of so many other sporting clubs, is heavily dependent on the commitment and dedication of volunteers.

‘Tennis offers a way for people to come together to play and then socialise after. We have great facilities at Manning so as a tennis club, it offers an avenue for people with different interests to come together and create that sense of community spirit,’

‘Without volunteers, clubs would struggle to exist. They are crucial in bringing people together and building that community spirit which, once fostered, will have an extremely positive impact on the wider community” Augustin said.

Manning Tennis Club President Rod Philp says Augustin was a highly valued club committee member, whose significant contribution to developing and promoting the club was only rivalled by his proactive enthusiasm for creating positive change for the betterment of the club and the wider community.

‘Over the years, Dwayne has contributed countless volunteer hours which have been instrumental in the clubs ongoing progress and development,’

‘Dwayne’s contribution to the success of many club projects including club renovations, court resurfacing, the replacement of the playground, installation of Book-a-Court and the appointment of our Club Coach is without a doubt priceless,’

‘Many operating tasks also fall to Dwayne including the recent update to the club’s constitution, webpage management, social media management, as well as his role as the club’s approved bar manager and Tennis West delegate,’

‘And as the Club Captain for the past seven years, Dwayne also takes on the responsibility for organising the senior club championships, social tennis tournaments, transitioning juniors players to continue at the club as senior players, as well as playing an active role in Club Open Days,’ Philp said.

Augustin first began volunteering when he was required to complete placement hours as part of his studies. Deciding that it was better to work for free and help make a difference, than is was to work for minimal pay in any other placement arrangement, Augustin began as a volunteer with the Activ Foundation. Attending the Manning Tennis Club AGM in 2011, Augustin says his attendance assured he was given a role on the committee.

‘It’s what happens when you rock up to an AGM – you get given jobs!’

‘My area of professional expertise is in public affairs, communications and marketing. I enjoy being able to use my skills in playing an active role in shaping the direction of the club and helping to bring some of the clubs goals to fruition,’

‘More importantly, by continuing to be a part of the committee, it means that I can play an influential role in the creation and fostering of the welcoming community culture and environment we’re trying to create at the club,’

‘Volunteering means giving up your time and using your skills or knowledge to help someone, something or somewhere become better than it was before and the best thing is when you see the difference it makes to even one person – that’s special,’

‘I also believe that if more people help, the job becomes easier so if I have the knowledge, skills and ability to help out at the club then why not,’

‘With all of my different roles at the tennis club I get to engage with every single club member and so many non-members who are part of our extended Manning Tennis Club family and it’s always nice when you go somewhere and everyone seems to know you, even if they only know you as the Facebook guy,’

‘I love the fact that my volunteer roles have allowed me to meet so many different key stakeholders and people in the wider tennis community,’

‘I’m quite delighted that I know a majority, if not all, of the members of our club as well as people who aren’t members but play at our club or are parents of our juniors,’

‘This is something that probably wouldn’t be the case if I just paid my membership and simply played tennis,’

And when asked about his greatest achievements as a volunteer, Augustin says it’s the collective efforts that mean the most.

‘The best was when we won Club of the Year at the 2016 Tennis Industry Awards night. It was a great recognition of all the effort so many people had put into building the club. So to be part of that was great,’

‘However, some of the greatest feelings are whenever we really manage to bring our tennis family and community together,’

‘Whether it’s Open Day events, our recent Playing for a Cause fundraiser which raised $10,000 or our Inclusive Tennis Day where we managed to have Jessica Strutt from the ABC broadcast her Focus segment live from our event,’

‘These are the moments which really makes me proud and reaffirms why I keep spending hours volunteering,’

‘It’s always feels nice to be able to share laughs with people you probably only know because of your volunteer work and it certainly makes me proud when people comment on the welcoming nature and environment of the club,’

‘Volunteering is like having a second job except your payment is the satisfaction of knowing you’re doing it for the betterment of something you love,’ Augustin said.

Tennis West CEO Michael Roberts applauded Dwayne and the countless volunteers, recognising them for the collective dedication to the delivery of tennis and proficient running of clubs across by metropolitan and regional WA.

Facilitated by Volunteering Australia, the 2020 National Volunteers Week will this year be a virtual celebration of Australia’s volunteers. For more information you can head to: https://www.volunteeringaustralia.org/#/