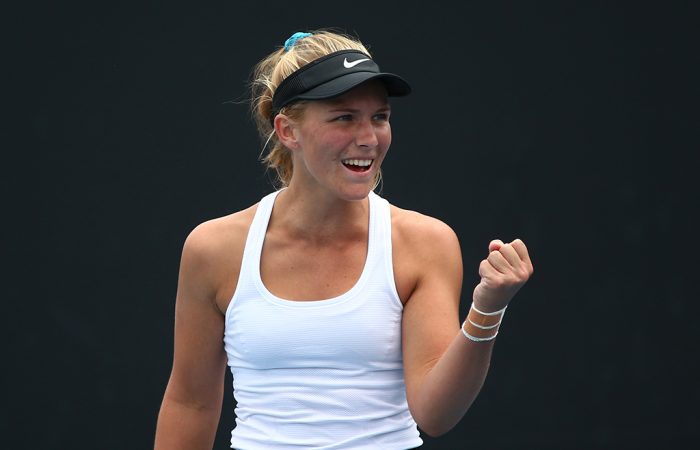 Inglis will contest the first of the back-to-back swings, following her biggest win to date, having claimed the W60 Burnie International tournament earlier this month. Inglis beat world number 92, Paula Badosa of Spain, in a tight two set semifinal match 7-5, 7-5. Inglis then went on to claim the title over the USA’s Sachia Vickery, whose 2018 career high ranking of world number 73, failed to deter a determined Inglis, who fought back from a set down, to claim her maiden W60 event 2-6, 6-3, 7-5.

Unstoppable in 2019, Inglis claimed three ITF W25 titles including, the Nonthaburi, Thailand title, the Saskatoon, Canada title, as well as the Toowoomba, Australia title in October. Keeping good company throughout the 2019 season, Inglis contested a host of impressive quarterfinals, semifinals and finals, moving her ranking more than 250 places in just twelve months.

Tennis West Manager of Competitions and Tournaments and Perth International Tournament Director, Loretta Hughes says it’s exciting to see Inglis back in the draw alongside a strong Australian line up who will be competing against top quality players from all over the world.

‘We are fortunate to have Maddy home in Perth to contest the title, she last played in 2018 where she finished as a semifinalist. But she’s a different player now who had an incredible 2019 winning three ITF titles. It will be great to see her out on court at home here in Perth,’

‘We have a strong list of Aussie girls named in the main draw, including 15 year old Perth local and 2019 Newcombe Medal Female Junior Athlete of the Year, Talia Gibson, who received a wildcard entry,’

‘It’s a truly wonderful Aussie line up, with the competition only strengthened by the large number of international athletes who have travelled from all over the world including France, Korea, Japan, Italy, Russia and the USA,’

Sitting as the centerpiece to the back to back swings, the 2020 Festival of Tennis, will see 200 lucky youngsters take home a free ANZ Tennis Hot Shots racquet*, as part of the free family friendly event being held at the State Tennis Centre (Burswood) on Saturday 22 February.

Special guest Casey Dellacqua will join in the host of activities including fun tennis activities, a toddler ball pit, face painting, a bouncy castle, an animal farm and live music on stage from 10:00 am.  With plenty of food and beverage options available for purchase, including a sausage sizzle, soft serve ice-cream, coffee and healthy snack options, the 2020 Festival of Tennis promises to be a great day out for everyone.

All the action of the Perth International #1 Pro Tour event kicks off on Monday 17 at the State Tennis Centre, with the Singles finals to be played on Sunday 23 February. For more information head to:

*One racquet, per child under 10 years of age. Children must be in attendance to receive the racquet.

The Australian Pro Tour represents a series of 28 professional ITF World Tennis Tour and ATP Challenger tournaments held annually, in Australia, over 17 weeks between September and April. The Pro Tour calendar offers a total prize money pool of over US$1.1 million dollars annually, providing players with a competitive pathway; all-important earning opportunities, and ATP/WTA Tour world ranking points that facilitate a players livelihood as a professional player. The Calendar offers a range of different level tournaments to accommodate for professional players at different stages on the competitive pathway. More information can be found at https://www.tennis.com.au/tournaments/pro-tournaments/australian-pro-tour