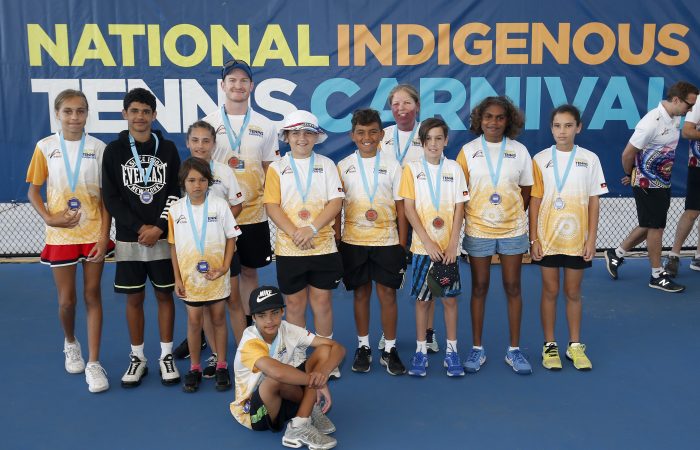 In a further coup for WA, Andrew Dickie was awarded the NITC Deadly Award for his outstanding leadership on-and-off court. The prestigious award, as voted by leaders from each State and Territory, was awarded to the stand out male and female across all participants of the event. Dickie was presented with a racquet decorated with cultural significance by last year’s participants and signed by Evonne Goolagong Cawley and Ash Barty.

NITC Deadly Award winner Andrew Dickie said that it was the making of friendships that he enjoyed most about the carnival.

“I really enjoyed meeting and playing the players from the other states and territories,” Dickie said.

Tennis West Program Pathway Leader Ardian Fazliu said the event provided an amazing opportunity for indigenous athletes from across the country to be united not only through culture, but also through tennis.

“The Carnival provided an incredibly powerful platform for indigenous athletes from across the country to come together as one,”

“They came as individuals and left as team mates making significant connections with other players from across the country,”

“Each and every player who attended the Carnival was galvanised by tennis, it was incredible to witness,” Fazliu said.

Tennis West CEO Mr Michael Roberts says the NTIC is a great initiative which builds on the pathways and programs available to Indigenous athletes whilst at the same time providing an opportunity for cultural activities and celebrations.

“Offering these programs and carnivals is essential to the delivery of tennis across the country,”

“The National Indigenous Tennis Carnival is a great celebration of culture and tennis and the Tennis West team wish to congratulate our young Indigenous players on such outstanding results,”

Additional information on the 2019 NITC –
• More than 180 participants travelled to Darwin for the 2019 National Indigenous Tennis Carnival including 84 from NT, 42 from Queensland, 20 from NSW, 10 from WA, 10 from Victoria, 9 from ACT, 6 from Tasmania, and 3 from SA
• NT participants came from 6 communities including the Clontarf Boys Program from Nightcliff Middle School and as far as Numbulwar which is an 11-hour drive
• The event was not only focused on tennis, but provided a culturally immersive experience which saw participants getting the opportunity to take part in the Djuki Mala workshop and concert, learn basket weaving, jewellery making, painting, sculpting and didgeridoo making
• The event is a pivotal part of the Indigenous tennis pathway and provides an opportunity for not only elite Indigenous tennis players but those trying the sport for the first time
• A mural was also created at the event to recognise and celebrate the achievements of Indigenous tennis players Evonne Goolagong Cawley and Ash Barty and inspire participants attending the Darwin event